Casey Wright wanted to boost the number of boys in her gymnastics program.

“We then had three gyms with three classes (total) with only 10 boys,” she said. “I was talking to a mom in the bleachers and she said her son would absolutely love this kind of activity, but her husband wouldn’t go for it because it was gymnastics. Originally, it was a way to re-brand and re-market a gymnastics-like program for boys.

“Since then, it’s morphed into so much more.” 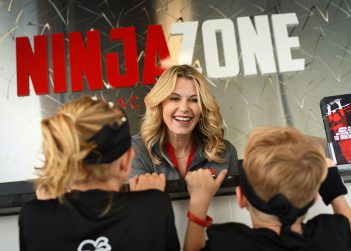 “It took off with the popularity of ‘American Ninja Warrior’ and emergence of parkour, which is like street gymnastics, jumping on walls and climbing from building to building and the principles of gymnastics and martial arts,” the Carmel resident said. “A lot of our character development comes from the martial arts piece. Ten boys (in the program) went to 365 kids in six months, and at that point I knew I had something pretty special. That was huge because gymnastics is typically 95 percent girls.”

Wright, 41, owns five Indianapolis-area corporate gyms, which have NinjaZones. There is a NinjaZone Academy in Geist.

Wright started testing the NinjaZone concept at her Greenwood gym at the end of 2013. She said she built FUNdamentals and Gymnastics in Westfield in early 2015 and conducted it there. The concept went national later in 2015.

There are now 335 licensed NinjaZone locations around the world.

NinjaZone started primarily for boys but is open to boys and girls, although the number of boys in the program is much higher than girls.

“It’s more of a holistic approach,” she said. “We are teaching them not only athletic skills but character-development skills, just life skills. The program has a perfect fusion of everything parents want for children at that age and gives them the foundation to go on and do whatever sport they wanted to as they get older. What really makes us different is we focus on the kids-centric coaches. We train all our coaches that the kid, the whole child, comes before the sport that they do, and that’s more important.”

NinjaZone is primarily for ages 18 months to 13. 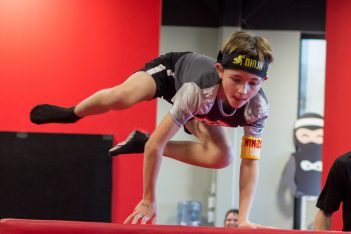 “He loves it,” New said. “My son loves to watch ‘American Ninja Warrior,’ so I think that show has brought awareness to this kind of movement. Instead of being in a leotard doing gymnastics, you are still doing a lot of the same movements, but it’s called different stuff. And there is more obstacle play kind of stuff.”

New said if his son wants to play another sport NinjaZone will help with balance and coordination. New said he likes seeing his son’s face after working to overcome obstacles.

“It’s such a great life skill,” he said.

There are two brands: Wright’s Gymnastics Academy, for more competitive gymnastics, and Wright’s FUNdamentals Gymnastics, which focuses more on recreation for younger kids and not competitive teams. Wright said the company is building a $5 million multi-sport facility at Grand Park in Westfield. She wants to open it in the summer of 2020.

“I used to coach at the elite level, but I’ve since concentrated more on the business and more on the community level,” she said.

“We had a kid on the Olympic training squad in 1999, and that taught me a lot about elite sports,” she said. “I then wanted to focus on college scholarships (for students). But I wanted to do more good for more kids as opposed to taking a tiny percentage and focusing the efforts on them. A lot of times, I don’t think (high-intensity training) did give back to the kids the way that everybody thought it would.” 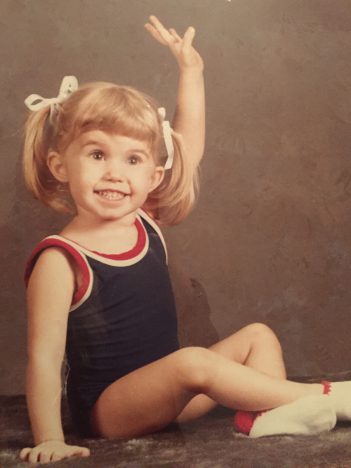 “They started one of the nation’s first private gymnastics clubs. It was really one of the first private athletic clubs,” Wright said. “That was in 1975, when everything was in a school system or a community center. They really blazed that trail. They quit their teaching jobs and became entrepreneurs pretty early on.”

Casey Wright competed in gymnastics until she was 11 and began coaching when she was 12.

Casey Wright attributes her entrepreneurial spirit to her parents.

“My dad always said he wanted to get out as much as he put in,” she said.

Casey Wright said her husband, Jeremy Ciano, an optometrist who owns RevolutionEYES and Little Eyes Pediatric Eye Care in Carmel, has helped teach her the fundamentals of operating a business.

Casey Wright has lived in Carmel for five years. She and Ciano have a blended family with Alex, 13, Bella, 12, Scarlet, 9 and Leo, 7. Alex and Bella are Ciano’s children from a previous marriage while Scarlet and Leo are from Wright’s previous marriage. All four children have participated in gymnastics or NinjaZone.