Deidra Rausch knows traditional therapy works for some, but it’s not always accessible to those who need it most. That’ where The Cabin comes into play, a nonprofit professional counseling center that financially assists patients through the Samaritan Fund.

A sliding scale is used to determine payment, based on the number of people per household, the household’s gross income and the federal poverty scale. The scale range is $34 an hour to $150 an hour, for those who don’t qualify for assistance. This year, The Cabin has provided $105,000 in financial assistance.

For the past 20 years, The Cabin has operated in Boone County, but a recent expansion will offer Hamilton County residents services closer to home. The Cabin recently opened its second location at 121 S. Walnut St. in Westfield. There also is a satellite location on Oak Street in Zionsville.

“The (Zionsville) Cabin is on Elm Street, there’s a satellite on Oak, and The (Westfield) Cabin is on Walnut, so we are just in the trees,” Rausch said. “I looked at our zip codes, and we actually serve 93 different zip codes in the state of Indiana. We felt we wanted to move east because often the reason folks don’t pursue mental health care is cost and access.

“Our hope is moving an office into the Westfield area will help those Carmel, Noblesville and Westfield folks.”

Rausch said The Cabins offers treatment for people of all ages, including children and the elderly. It provides therapy for individuals, couples and families for anxiety, depression, marital problems, addiction, infertility, pregnancy loss, transition issues like a second career or retirement and more.

“Some of the things that make us unique is we do typical talk therapy in a room, but we also have an adventure therapy program which might find clients walking trails, climbing trees and kayak therapy,” Rausch said. “Non-traditional approaches work really well, especially with teenagers who aren’t really into sitting in a room and talking about feelings.

“Some adults prefer to be outside walking on a trail than sitting in a room.”

“The fun thing about the (Westfield) space is it has detached a garage, and we are going to call that the studio. One of the clinicians over there is completing their certificate as a personal trainer, and we can merge a therapy session and personal training,” Rausch said. “It’s a different form of adventure therapy, and then the art therapist can use the studio for painting and movement. Our plan is a gal here always wanted to do yoga workshops, so it’s a bigger space to do more creative things.

“I think traditional therapy is great, but it’s not for everybody, so we want to make therapy accessible to everybody in a format that speaks to them.”

The Cabin also allows people to meet therapists to learn which person would be the best fit.

“If you don’t (have a rapport) with a therapist, nothing is going to happen,” Raush said. “We provide a meet-and-greet appointment to try out a therapist before paying. That’s especially important with teenagers.” 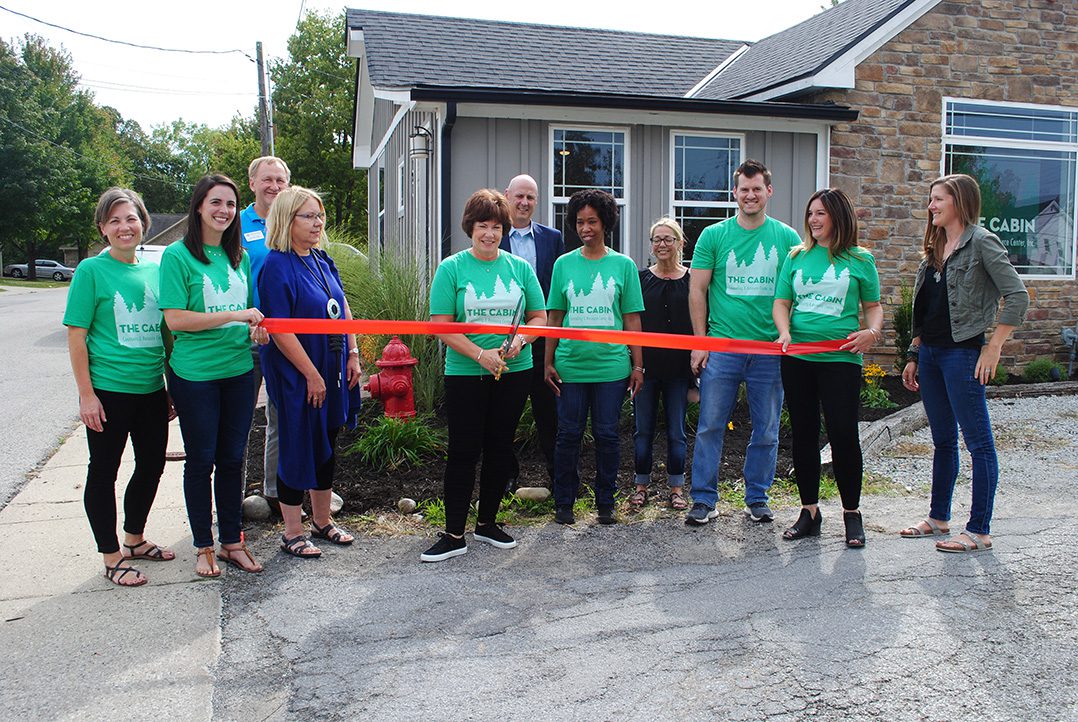 Deidra Rausch, center, cuts the ribbon for the new location for The Cabin at 121 S. Walnut St. in Westfield.

The Cabin By the Numbers