You are at:Home»Current in Fishers»Fishers Cover Stories»Born leader: FHS senior committed to giving back, empowering girls

Valerie Washington Chavis did a great deal of soul searching on what would complete her life.

“I asked myself what really matters to me,” Washington Chavis said. “It came down to a strange question, ‘If I died and wasn’t married or died and didn’t have kids, what would matter?’ I didn’t think I could die without being a mother.”

So, she began to look for young children, but not infants, to adopt.

“Ethiopia found me,” she said. “I didn’t even know anything about international adoption. I was going on the internet looking at different pictures of kids. It was a two-year process and I had decided to walk away.”

Then, she got a phone call about a brother and sister who had been in an Ethiopian orphanage for a few months. Six months later, she adopted Meron and her brother, Des, in June 2009.

From the first time she met Meron, Washington Chavis knew the chatty child was a leader.

Meron Washington is a Fishers High School senior and Des is a sophomore. The family moved to Fishers from the Chicago suburbs in 2015 when Valarie Washington married Patrick Chavis IV.

“My (biological) mom had me and my younger brother at a young age, so when my grandmother died, she wasn’t able to really take care of us,” Meron said. “She wanted a better life for us.”

That has certainly been the case.

“I love my life here and am so glad to be here,” Meron said.

Meron’s passion is repaying her good fortune by helping others.

“I’m glad I went through the hardships I did because it kind of made me the person that I am,” she said.

Meron conducted a shoe drive during the summer, collecting more than 2,000 pairs of shoes in 90 days that were sent to Funds2Org to be shipped to African nations.

Meron created a motivation coloring and activities book, “Every Girl Wears a Crown,” for young girls, which was released in August.

“It has images of little black girls doing anything that they want to do,” Meron said. “Each page has some kind of encouragement about loving yourself.”

At first, Meron didn’t speak any English but she liked to color. When she got older, she got involved with a scholarship program

“I wanted my involvement to be impactful as possible because I’m a huge advocate for little girls and women,” she said. “Social issues are what I love to do. I love helping people. That’s when I came up with the concept of a coloring book and also an activity book.”

Meron partnered with an illustrator, who came up with the images while Meron designed the activities.

More than 600 books have sold so far, including purchases in Canada and Germany. The books are available at meron2019debutante.com/product-page/every-girl-wears-a-crown-motivational-activity-coloring-book.

Proceeds benefit her college scholarship fund for the Debutante and Cotillion Scholarship program. Participants go through a six-month program where they attend workshops and perform service hours and conduct fundraisers. The Ivy Endowment then matches the money participants raise.

Meron has completed more than 200 hours of community service, well more than required. She said the most impactful event was a back-to-school event for Indianapolis students conducted by Shalom Health Care in July.

Meron said seeing families in need remind her of her life Ethiopia. She recalls an especially poignant moment when the students were given passports to pick up their backpacks through a program.

“When I asked them if they had their passport, some looked scared,” Meron said. “So, I changed the name to a flyer. It just felt wrong on so many levels. I still consider myself an immigrant. I’m an Ethiopian American.”

Although they weren’t supposed to give the children backpacks without a passport, Meron made sure all the kids got one.

“There was one woman with eight kids and the passport said you could only give out six,” Meron said. “We had way too many and (organizers) said we could take them home for ourselves. I don’t need a new backpack. I can buy another backpack or use the one from last year.”

“To know her story and witness all the ways she is leading and serving others, I am in awe and very proud to call Meron an FHS Tiger,” Urban said. “The number and variety of leadership opportunities Meron has pursed is impressive. Meron is always positive and has a sincere desire to make the world a better place.  Driven to make sure all voices are represented,  she committed to serving the underserved  and illuminating the talents of others.” 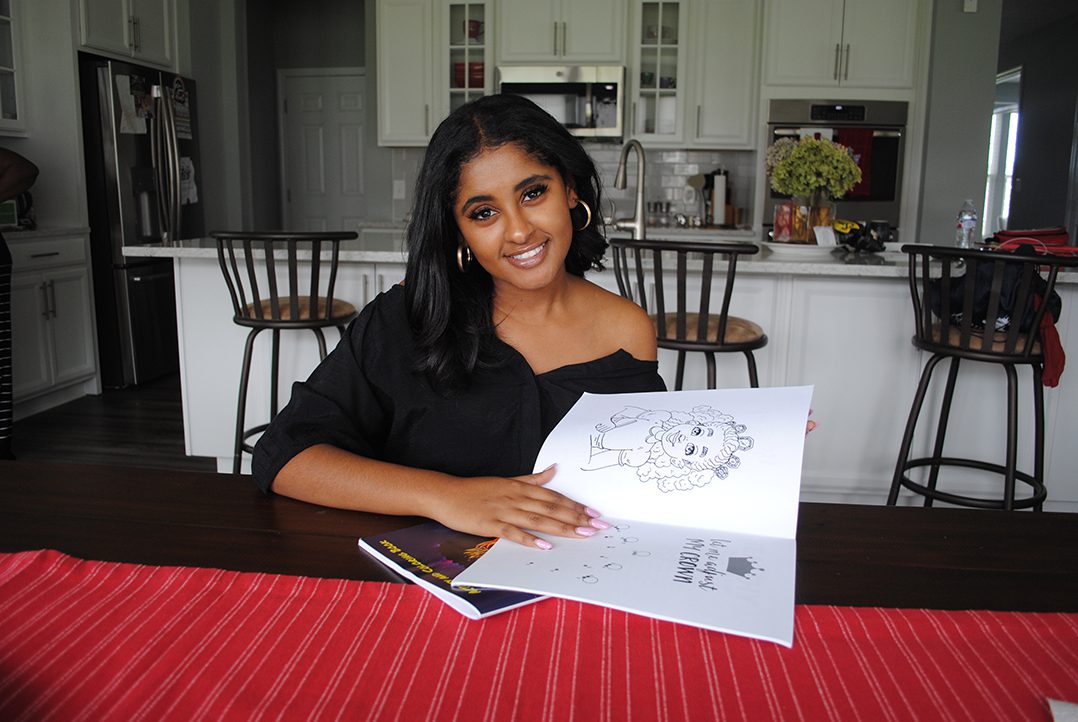 Meron Washington displays the book she created, “Every Girl Wears a Crown.” (Photos by Anna Skinner)

Future plans: Considering American University, George Washington University and Howard University. Wants to major in International affairs. “My goal in life is to work for the United Nations,” she said. “From that point on, to help women and girls.”

Favorite way to relax: Watching Netflix and documentaries and reading.