You are at:Home»Current in Carmel»Carmel Community»Former BMV commissioner joins race for 5th District

Zionsville resident Kent Abernathy announced Oct. 7 that he will run for Congress.

Kent Abernathy, an Army veteran and former Bureau of Motor Vehicles commissioner, is running as a Republican for the 5th District seat to be vacated by U.S. Rep. Susan Brooks at the end of her term. 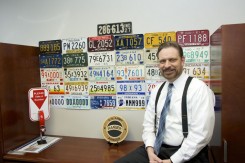 “We need leaders in Washington willing to make the tough decisions to defend the constitution, to pay down our debt, to honor our veterans, and to support our military,” Abernathy tweeted after announcing his campaign.

Abernathy grew up in Redkey, Ind., a tiny town about 20 miles northeast of Muncie. He attended West Point and became an officer in the U.S. Army, serving at Fort Knox, Ky., Fort Bragg, N.C., and in Korea.

After entering civilian life, Abernathy began working in the banking industry in New York City, near where his wife, Karen, grew up. His career eventually brought him to Indianapolis, where he served as a vice president with National City Bank and Bank One.

In 2003, Abernathy returned to the military, serving in leadership at the Pentagon, as chief of staff of the Iraq Assistance Group in Baghdad and as the interim director of the U.S. Central Command Washington Liaison Office.

Abernathy and his wife have three sons.