You are at:Home»Current in Westfield»Westfield Community»Age-restricted community meets resident pushback

A proposed development that could bring 490 age-restricted homes to Westfield is making its way through the city’s approval process. 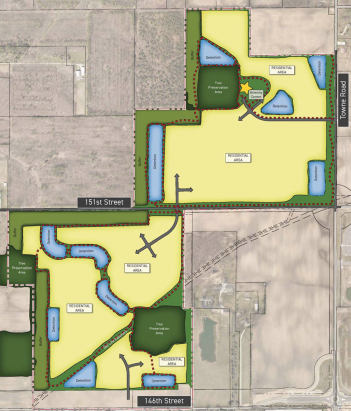 Developer Pulte Homes is petitioning the city to rezone 245 acres on the north and south sides of 151st Street west of Towne Road to build Claiborne Farms, a Del Webb community similar to Britton Falls in Fishers. But at an Oct. 7 meeting of the Westfield Advisory Plan Commission, citizens voiced concerns about the proposed density,  two homes per acre, in an area that is otherwise rural.

Resident Megan O’Connor, who lives nearby the property on Shelborne Road, was concerned about the lack of details.

“The plan that’s been given to us is very vague,” O’Connor said. “If we’re given a very vague plan to start with, we won’t know what’s actually going to come. I’m worried we’re going to end up with a very undesirable neighborhood in that area. In addition, the comprehensive plan for this area states that it should be given a more rural feel, and with the density that’s being shown here, I don’t think you’re going to get a rural feel at all.”

Scott Lavengood, who also lives on Shelborne Road, said besides density, he worries about the impact on infrastructure, including drainage issues and enhanced wear on an already poor road.

Julie Jones, a local Realtor and resident, said she and her clients support the project.

“Living and working in the area, I want to give this (project) a thumbs-up because I have several clients that are just dying for a community like this,” Jones said. “We just desperately need affordable housing for our empty nesters.”

The homes would range in price from $260,000 to $400,000. Development plans also include a 7,000-square-foot indoor community center with bocce ball, pickle ball, a fitness center, pool and other amenities. The project also outlines outdoor plans for an internal trail network, community gardens, kitchen and dog park, among other features.

The plan commission vote at a future meeting to send a favorable or unfavorable recommendation to the Westfield City Council, which will have final say.