You are at:Home»Current in Westfield»Westfield Community»Westfield Boulevard awards bids, construction to start this fall

Within the next six weeks, a road construction project which has been planned since 2016 will begin.

The Westfield Boulevard extension will connect the roundabout at Ind. 32 and Shamrock Boulevard to David Brown Drive, also known as 169th Street. 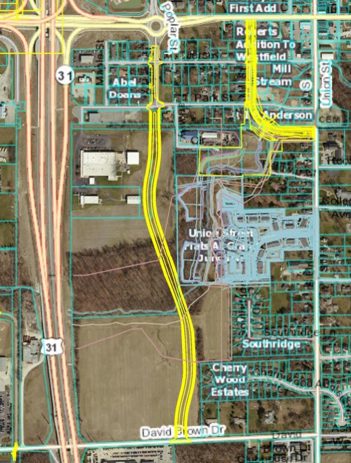 By the end of 2020, Westfield Boulevard will extend from the roundabout at Shamrock Boulevard and Ind. 32 to David Brown Drive. (Photo by Anna Skinner)

“This project has been in the works for a very long time. Since 2016 is when we partnered with (the Indiana Dept. of Transportation) for this,” Director of Public Works Jeremy Lollar said.

Normally, the city either funds its own road projects or does so through the Indianapolis Metropolitan Planning Organization, but Lollar said the project is funded through a federal exchange program with INDOT.

“The reasoning behind INDOT’s willingness to fund this is when U.S. 31 comes through, it eliminated the full access at 169th Street,” Lollar said. “INDOT determined they needed to provide better access to businesses along 169th Street, and this road aligned with our long-term thoroughfare plan to provide connectivity throughout the city. That’s how it kind of originated.”

The federal exchange will fund 75 cents on every dollar, so out of the $4.87 million project, INDOT will pay for $4.5 million.

Eventually, the road will extend to 161st Street.

“In the long term, the plan is to connect to the 161st (Street) portion, which is already constructed, and connect Ind. 32 down to 146th Street,” Lollar said. “That’s not determined yet. It will come with development.”

The project also will include widening and reconstruction to Park Street and the roundabout at Ind. 32 and Shamrock Boulevard. No closures are anticipated. Lollar said some of the new road will pass through an undeveloped area, zoned the Grand Millennium Center planned unit development, north of David Brown Drive.

“(The road) encompasses all the area adjacent to the new alignment, which includes hotel, commercial and restaurants. It’s a hospitality use,” Lollar said.

Birch Dalton is the developer of the Grand Millennium Center PUD, and Lollar said the intention is for the development to begin after the road is finished.

When complete, Westfield Boulevard will be one lane in each direction and with a dedicated turn lane.

Part of the project also includes an extension to the Midland Trail, which will connect to the Poplar Street trail and jog south to 169th Street and then to the Monon.

“The Monon will be connected to the downtown,” Communications Director Vicki Duncan Gardner said. “The Midland Trail runs behind restaurants and Park Street to connect to Poplar and go south.”