You are at:Home»Current in Carmel»Carmel Community»Characters of Carmel: Meet Aaron Schutt 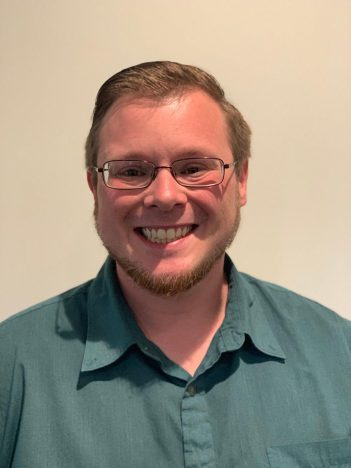 Aaron Schutt has a good reason for not believing in ghosts. Because he grew up with a mortician for a father, he’s convinced that if ghosts exist, either he or his father would have witnessed at least one haunting experience. Both parents still live in his hometown of Greensburg, where Schutt was active in high school basketball, football and golf. He also raced go-karts and sprint cars before attending Ball State Universtiy.

As a global support agent for Salesforce, most of Schutt’s time during the weekdays is spent on the Salesforce marketing analytics platform. Although the position requires working behind the scenes, his personal life is the complete opposite. He loves meeting new people and is an organizer for the local MeetUp group “Random Places, Random Things,” which has more than 7,000 members. He frequently plays host to bar crawls, movie nights and dinners at northside restaurants and also is pursuing a career as a stand-up comedian.

Biggest lie ever told: Every semester, told a professor that a relative died and took a pamphlet from the funeral home

Greatest accomplishment: First in his family to graduate with a four-year college degree

Biggest regret: Choosing a girl over a job

Do you know an interesting character who lives, works, or worships in Carmel? Send suggestions to sgattlieb.currentincarmel@gmail.com.