Indiana University kicker Logan Justus is quickly gaining a reputation as one of the top college kickers in the nation.

The 2015 Mt. Vernon High School graduate from McCordsville was named one of 20 semifinalists for the Lou Groza Award for top college kicker. 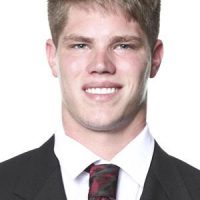 “Just (to) keep working hard and keep executing my job is the most critical thing,” he said.

Justus also was named a Groza Award semifinalist last season. He made 15 of 18 field goals, including a long of 44, and 32 of 33 extra-points in his first year as the Hoosiers kicker.

Justus, a left-footed kicker, opened this season with a smash by hitting four field goals, including ones of 48, 49 and 50 yards, in a 34-24 victory over Ball State University Aug. 31 at Lucas Oil Stadium. He was named the Big Ten Special Teams Player of the Week.

“It really improved my confidence with the team and with myself of being able to execute in games,” Justus said.

He said the strength coaches do a good job of helping him to improve his leg strength and explosiveness.

“I’ve seen it increase more and more,” he said.

Justus said his range for a game is 56 to 58 yards, but the 50-yarder is the longest he has attempted.

Prior to the Oct. 19 game with at Maryland, Justus had hit all seven field goals and all 23 extra-points.

Justus, a fifth-year senior, redshirted his first season and was a backup to two-time Big Ten Kicker of the Year Griffin Oakes in 2016 and 2017.

“There is a lot Griffin Oakes taught me as far as game comfortability and how to play in different atmospheres,” he said.

Justus, who arrived at IU as walk-on, juggled soccer and football at Mt. Vernon, but began seeing he might have a shot at kicking in college as a sophomore. He also played hockey while in high school.

“There were times I went from football to soccer practice to, later at night, hockey,” he said.

Now, he has a goal of reaching the NFL.

“I think once I got a chance to show what I can do, it will be a lot more possible,” Justus said.