When Actors Theatre of Indiana co-founder Don Farrell read the script of “Hollywood, Nebraska,” he immediately envisioned his daughter, Lizzie, in the role of Katie.

“I could hear her saying these lines, but I didn’t bring her up immediately to the team,” Farrell said. “Not because I don’t believe in Lizzie. I do, strongly. I hesitated to for fear of this casting being looked at as nepotism.” 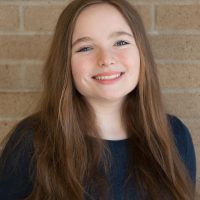 However, “Hollywood, Nebraska” playwright Kenneth Jones had seen social media posts about Lizzie Farrell and brought up the possibility of her playing the role to her father.

Lizzie, a Carmel High School freshman, will participate in the ATI’s reading of “Hollywood, Nebraska” as part of the ATI Lab Series at 7:30 p.m. Nov. 5 at The Studio Theater at the Center for the Performing Arts in Carmel.

Lizzie saw herself in the role of Katie when she learned about the character.

Judy Fitzgerald, Lizzie’s mother, and Cynthia Collins are the other two ATI co-founders. Fitzgerald is playing Jane in the reading and is one of the main characters, an actress returning to her hometown.

“Growing up surrounded by theater, Lizzie has more insight than most 14-year-olds of what it takes to get a show off the ground,” Fitzgerald said. “This will be the first time that my daughter and I have had the chance to perform together in a project. I am beyond thrilled to share the stage with her.”

Rehearsal time for the reading is limited. Lizzie said it helps that she can rehearse lines with her mother.

Lizzie was an understudy for the role of young Judy Garland for ATI’s “Beyond the Rainbow” in 2017, which Don Farrell directed.

“She did go on for one performance and she did extremely well,” Farrell said.