You are at:Home»Current in Carmel»Carmel Community»Carmel second-grader heading to National American Miss Pageant

“What I like about it is it helps me grow confidence in public speaking,” she said. 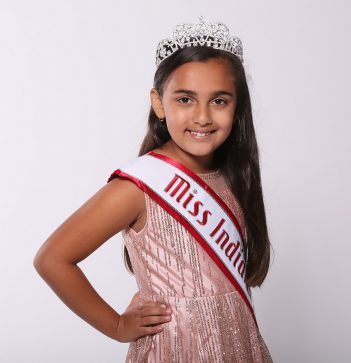 Syna Vohra will compete in the National American Miss Pageant Nov. 23 to 29. (Photo by Imagine Studios)

The College Wood Elementary second-grader was crowned Miss Indiana Princess (age 4-7 division) at the state pageant during Labor Day weekend in Indianapolis. The Carmel 7-year-old, whose parents are Shruti Sakhuja and Yogesh Vohra, will compete in the National American Miss Pageant Nov. 23 to 29 in Anaheim, Calif.

There are three rounds for the competition: personal introduction, interview and formal wear.

In addition to competing in pageants, Vohra said she enjoys volunteering at a food pantry and serving meals at the Ronald McDonald House. She also enjoys creating art and playing the piano.

Vohra will compete in an optional competition during the national pageant. She plans to perform a classical Indian dance. Her dance teacher is Anindita Sen from the Nrityangan Kathak Academy.

Vohra’s mother attended an informational meeting in April to learn about the pageant.

“We decided to give it a try to see what it’s all about,” Sakhuja said. “She got a call the next day to say she was one of the state finalists. The main motivation for me was this pageant has nothing to do with glamour. In fact, they have a no-makeup policy for those 12 and under.”

There were 35 to 40 participants at the state pageant.

“We were all surprised and excited when she made it,” Sakhuja said.

Braces For U has played a large role in providing the sponsorship fees for the national pageant, Sakhuja said.