You are at:Home»Current in Fishers»Fishers Community»Autonomous vehicle pilot program slated for Fishers

PerceptIn, a California company specializing in autonomous driving technology, plans to relocate its headquarters to Fishers. Its global headquarters are located in California, but the company plans to change that with the announcement of an autonomous vehicle pilot program which could create up to 50 high-wage jobs in Fishers by 2022.

PerceptIn plans to establish its headquarters at the Indiana IoT Lab, 9059 Technology Lane, early next year. 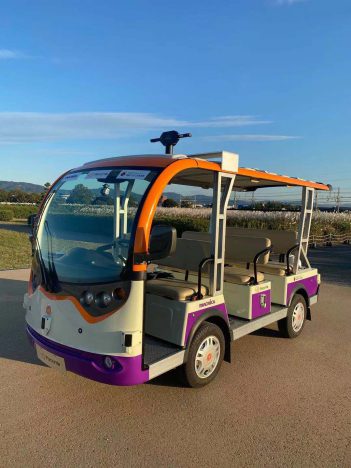 PerceptIn’s vehicles can hold up to eight passengers and don’t travel more than 20 MPH. (Submitted photo)

“When we launched the Indiana IoT Lab in 2017, a company like PerceptIn is exactly who we had in mind to propel our city even further as a leading city for tech,” Fishers Mayor Scott Fadness stated. “Fishers is a city made for entrepreneurs, and today we are happy to support the future of transportation technology through this pilot program and in support of our newest Fishers company, PerceptIn.”

PerceptIn’s pilot program is centered around transporting passengers from Launch Fishers, 12175 Visionary Way, and the IoT Lab to the heart of the downtown, a little more than a half-mile drive. The autonomous vehicles would travel a fixed route and would transport passengers daily from 10:30 a.m. to 2:30 p.m. for short trips, such as to a restaurant or meetings. The driverless vehicles can hold eight passengers at one time. Vehicles do not exceed 20 MPH, and the vehicles are monitored by technology ambassadors to ensure safety. Routes will be expanded pending the results of the pilot program.

In order to launch its pilot program, PerceptIn is working with the city and Energy Systems Network, Central Indiana Corporate Partnership’s energy and transportation technology initiative, and local leaders and stakeholders. The pilot program is expected to launch next year after the company moves to Fishers.

“We’re extremely excited to relocate our headquarters to Indiana,” PerceptIn CEO Shaoshan Liu stated. “Indiana’s commitment to growing and enhancing its technology sector, along with its business-friendly environment and collaborative industry partnerships, is why we chose to locate here. Additionally, we look forward to deploying our autonomous micro-transit services in Fishers, and increasing our presence throughout the state, setting an example for the rest of the nation on utilizing advanced technologies to improve public transportation systems.”

The Indiana Economic Development Corporation offered the company up to $3.5-plus million in conditional tax credits, dependent on the company’s job creation plans.

The Fishers Redevelopment Commission will consider approval of an agreement between the Indiana IoT Lab and PerceptIn at its Nov. 25 meeting. For the agenda, visit fishers.in.us.