“This is my favorite concert of the year because it is a concert not just for our parents, but instead for the entire community of Carmel,” Martin said. “Around this time of year when everyone is in a better mood, it’s great to be a part of something that can bring joy to the hearts of people who just want to go out and have a good time.”

“Holiday Spectacular” has five performances: Dec. 4, 5, 7 and 8 at the CHS auditorium. 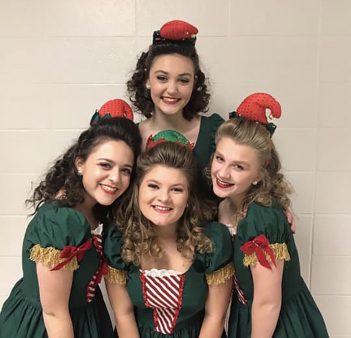 “The best part of the theme this year is that we get to do a variety of songs and not just the traditional carols that people hear all the time,” said Martin, a member of the Ambassadors mixed show choir. “There are some classics, but they are all done with a twist on them.”

The theme is “Senses of the Season.”

“Each sense highlights different aspects of the holidays and is intended to spark holiday memories,” senior Megan Walawender said. “From the smell of turkey roasting in the oven to the sound of bells ringing, the show will put every audience member in the holiday spirit.”

“Each choir will perform at least a couple of songs, and there are also large-group members as in the past,” she said. “Of course, Santa Claus will make an appearance.”

This year’s show features more than 500 singers and dancers, more than 40 orchestra members and more than 30 tech students helping behind the scenes. In addition, approximately 150 parent volunteers help with the production.

“One other new thing that will be included in this year’s show is a video component with screens on the side of the auditorium walls where cameras will zoom in on close-ups of students during performances, similar to a rock concert-kind of setup,” Kouns said. “My favorite thing about the holiday show is when the choirs come together on stage, and we see so many young people giving such an incredible gift to their community and sharing the holiday spirit in such a positive way.

“That builds so much camaraderie within the program and makes every single student feel special.”

“It closes out the first act and several of the groups participate,” she said. “It is a high-energy song that will surely be remembered.”

The concert is Walawender’s favorite of the year, too, because it kicks off the holiday season

“A special aspect of this concert is that any first-year choir performer gets paired with an upperclassman to show them the ropes and bring them a special treat throughout the run of the show,” she said.