You are at:Home»Current in Westfield»Westfield Cover Stories»Growing the Rock Way: Westfield Washington School map out next five years of new projects, growth and a falling tax rate

Westfield Washington Schools Supt. Sherry Grate has plans for the district’s growth during the next five years. They include a possible performing arts center, a new central office building and programming, such as before-and-after care, and capital improvements that include, among other items, roofing. 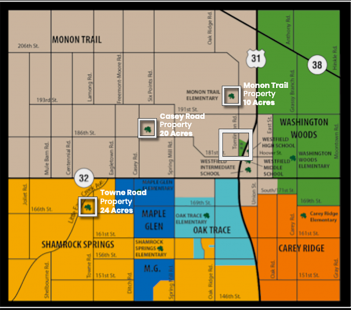 A map shows land WWS has available to build on. (Submitted image)

Grate is certain the district can accomplish all of her objectives without raising the school’s debt tax rate.

Grate and the WWS team put together a presentation called “Growing the Rock Way,” and they have begun to show the presentation in the community.

“The whole purpose of this ‘Growing the Rock Way’ presentation is we are one of the fastest-growing school districts in the state, so we have been working with the (school) board to put together a long-term plan to address growth and enrollment in the district,” Grate said. “We just wanted to be transparent with the community about what they can expect to see over the next five years.”

A demographic study completed in 2016 was the catalyst for renovations to the intermediate, middle and high schools. Improvements should be complete by 2020. However, district leaders realize enrollment will continue to grow, and they will need to accomplish several projects to keep up with the growth. 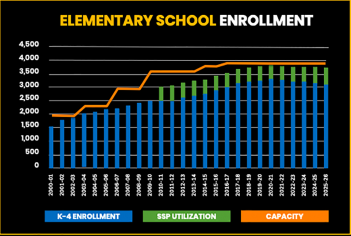 A graph depicting the elementary schools’ capacity through 2025. (Submitted image)

One of the pressing problems WWS plans to address is the space in elementary school classrooms that house fee-based programming like before- and after-school care or the TOTs. Twenty-one elementary classrooms are used for those programs, and Grate said before if the district decides to build a new elementary school, it must first free up that space.

The proposed solution is to construct a new building for the central office and the fee-based programs. The district is still looking for land for the new office. The lease for the current central office, 1143 E. 181st St., expires next year. Grate said the district plans to begin construction on the new office in 2020. She expects that project to cost approximately $16.

Currently, the district leases the central office space for approximately $120,000 a year. 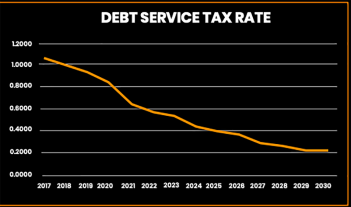 Other future projects and budgeting items include a $16 million plan for more athletic fields at Monon Trail Elementary; a transportation facility expansion; an alternative learning space and a large-group instruction space at the high school; a $16 million performing arts facility in 2024; and $5 million for facility maintenance in 2025.

Tomamichel said the district plans to pay for the proposed projects through debt.

Grate said district staff is willing to meet with community members to show them the “Growing the Rock Way” presentation and answer any questions. For more or to schedule a meeting, email Carrie Cason or Kate Snedeker at casonc@wws.k12.in.us or snedekerk@wws.k12.in.us respectively.

No need for a referendum

Apart from renewing the current operating referendum in 2023, district leaders don’t expect to ask taxpayers to approve the projects due to the lower price point. If a project is below $5 million, it is up to the school board for approval. If a project costs between $5 and $16.3 million, it can be completed without a referendum as long as constituents have the ability to file a petition-remonstrance if desired. For projects above $16.3 million, districts must advertise for the petition-remonstrance period, and then each side must conduct a signature drive, which leads most school districts to opt for referendum dollars to avoid tax caps.