Dylan Gentilcore is a firm believer that esports gives a variety of students a chance to compete.

“It’s definitely not as able-bodied bias as a lot of traditional forms of competition,” Gentilcore said.

The Carmel High School teacher started the esports club at the start of 2018-19 school year. 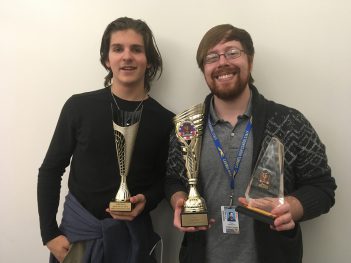 “It was at the behest of some students who knew I was passionate about video games,” said Gentilcore, who recently began to be paid like other club sponsors.

Gentilcore said it started with one student wanting to play his favorite game, Hearthstone, a digital trading card game. However, Gentilcore knew his students’ interests went beyond that.

“I took it upon myself to expand behind that one game and now we’re at 12,” Gentilcore said.

The club grew from 30 members last school year to approximately 100 members this year. All but four club members are male, but Gentilcore said he is working on getting more female gamers involved.

Several teams qualified for the Indiana High School Esports Network state championship at the Microsoft Store in the Fashion Mall at Keystone.

“When we played Noblesville online, it’s the same passion, the same energy when we play them in a traditional event,” Gentilcore said.

It also creates a different experience when CHS plays smaller schools like Rossville or Western Boone.

“When teams get to compete against us, they get fired up,” Gentilcore said. “They want to beat Carmel, and where else are they going to get that opportunity?”

Gentilcore said the next step is to develop a computer lab so his school can host larger gaming sessions with other teams.

Gentilcore said the games are typically strategy games and include first-person shooters like Overwatch.

“I completely lay out what these games are, what their ratings are and the content,” Gentilcore said. “My focus is always reaching out to the students and providing a safe and constructive environment to improve the ability and focus on the same intangibles they would get from another organized club where they can expand on communication, leadership, team work.”

Although Gentilcore realizes some shooting games can be considered controversial, he said the school administration has been supportive.

“If you have distress in your life or mental health issues, you might have a vice that you let consume you,” he said. “For some, that is violent video games. For some, that is drugs and alcohol, so instead of what they’re playing, I’ve approached why they are playing it.

“We haven’t had any issues on the games they are playing. We make sure we have the full consent of the parents.”

Gentilcore monitors when the games are played at school and when students are playing league games at home.

“Whenever we talk about these games, it’s always through the strategic lens,” Gentilcore said. “It’s not about running around killing people mindlessly. It’s about following through on the goals of the game, which are often about reaching a certain point or capturing a spot on the map.”

“I have to fight this stigma of people thinking gamers are nerdy kids that aren’t as cool,” Bogue said. “Look at me. I help run this club after being involved in nothing (school-wise) my freshman and sophomore year. I’m involved with multiple teams.”

Bogue also helps on a school radio show, where esports and performing arts are main topics.