Mike McCooey is a huge proponent of the benefits of Young Life.

“We are trying to reach every kid everywhere, for eternity is the verbiage they use a lot,” McCooey said. “It’s an incredibly successful, very dynamic ministry when it’s in full force. I feel it’s a great option for our kids. It’s one that should be in Zionsville, without a doubt.”

McCooey was the one of original people involved with starting a Young Life club in Zionsville approximately 15 years ago. Young Life’s mission is introducing children to Jesus Christ and helping them grow in their faith. It is often accomplished through games and skill-building experiences.

The club has been on hiatus at Zionsville Community High School since the fall of 2018, but it is in the process of restarting for the 2020-21 school year. 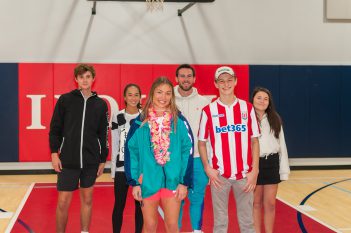 “It was due to waning financial support,” committee member Nick Abel said of the hiatus. “Participation did decrease the last few years.”

McCooey and his wife, Renae, are on the committee as well. McCooey’s oldest daughter, Reagan, a ZCHS senior, was previously involved in Young Life. And his younger daughter, Riley, is a ZCHS sophomore who has been attending a group with Brebeuf Jesuit Preparatory and Park Tudor students.

McCooey, who was involved in Young Life while growing up in Bethlehem, Pa., said one of the issues facing the club was a loss of leadership.

Newt Crenshaw, who helped start the Young Life club in Zionsville with McCooey, left to become president of Young Life, headquartered in Colorado Springs, Colo., in 2016. Crenshaw was a committee chair and a charismatic leader, McCooey.

“When he left, a lot of our donors didn’t leave Young Life, they went on to donate to big national or international organizations like Young Life Nicaragua,” McCooey said.

In addition, McCooey said charismatic leader Andy Miller left his position with Young Life as area director as he and his wife, Darcy, moved on to the next phase of their lives with their young children.

Those two factors, along with other key donors’ children graduating, created challenges/

“So, we were in a little bit of a slump, but it’s picking back up,” McCooey said. “We’re looking at adding new donors, new leaders and adding part-time staff. We’re very confident we’ll get it restarted.”

Abel is convinced participation will increase.

“We have committee members who have been waiting, and now their kids are in that sweet spot in high school,” Abel said. “Like me, they started before their kids were in high school. I think the interest is out there, and, even more than interest, I think there is a need.”

Abel was involved in Young Life in high school in Iowa and was a volunteer leader after college. He has been on the ZCHS committee for five years.

Abel said some of the magic in Young Life is the relationship the leader forms with the kids in their own community.

“So, our kids are getting a good experience going to club meetings (outside ZCHS) and having fun, but we are lacking those leaders in Zionsville that come into their lives,” Abel said.

Abel’s daughter, Nina, is a Zionsville West Middle School eighth-grader and is excited about joining a ZCHS chapter in the 2020-21 school year.

“Everyone was very friendly,” Towns said. ”It’s fun and engaging. They find ways to have fun and connect it all together with the Bible.”

Towns said he is excited about a club restarting at ZCHS.

“It would mean that I won’t have to travel as far and it would mean more familiar faces,” he said. “It would give others in Zionsville who maybe didn’t know about Young Life an opportunity to try it out.”

“I think it’s important. Every kid needs to know the Lord,” she said. “Kids have a lot of pressure. It’s nice to go to a place that is stress-free. Most club meetings, you sing and dance and dress up. It’s like a pressure-free youth group where they don’t pressure you about it.”