You are at:Home»Current in Noblesville»Noblesville Community»Lexie Almodovar leaves mark at Noblesville High School

Senior Lexie Almodovar will leave Noblesville High School with most of the major volleyball hitting records. 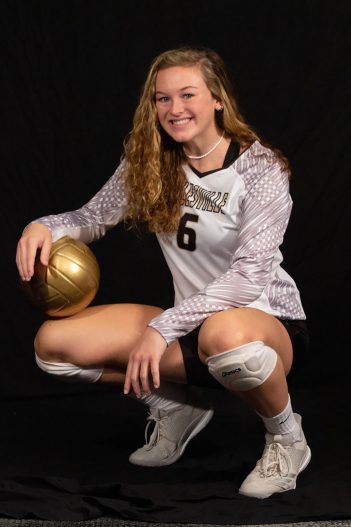 “Throughout my four years, I felt very supported by my teammates and the coaching staff,” Almodovar said.

The head coach is her mother Jill Almodovar, a former NHS volleyball standout herself who played at Purdue Fort Wayne.

“Lexie broke every hitting record and is probably the best all-around volleyball player Noblesville has ever had,” Jill Almodovar said. “Lexie is phenomenal player but she was being recruited for college as a back row player. She set out of the back row her whole senior year.”

The 5-foot-8 Almodovar set the single-season record for kills as a junior with 554 and holds the career record with 1,829 kills. She was named Indiana All-Star her final two years.

Almodovar, who has played club volleyball for Munciana since she was 8 years old, signed to play at University of Dayton last month. She committed during her sophomore season.

“I got the feeling when I stepped on the campus, that’s where I wanted to be,” Almodovar said. “It’s been a long time coming, so I’m pretty excited to get there next fall.”

The four-year starter led the Millers to a sectional title as a sophomore.

“Even though we didn’t win as many games as I like my last two years, I grew as a teammate and a leader,” Almodovar said. “I valued my time with the girls. We were all very close.”

Almodovar said it wasn’t difficult playing for her mother her final year. She played for Steve Hawthorne her first three seasons before he resigned after her junior year. Jill Almodovar had two previous stints as the Millers’ head coach.

“When we stepped on the court, it was coach and player, not mother and daughter,” she said. “We worked together well and agreed on many things. We never brought our volleyball struggles or arguments home.”

Almodovar, who was team captain for three years, was named Most Valuable Player at the team banquet. Sophomore middle hitter Ella Peter won the Krissi Davis Legacy Award. Davis, a former Noblesville girls basketball and volleyball player, died in September. Jill Almodovar, whose maiden name was Lyon, was a teammate with Davis on both teams.