Singing was always prevalent around the Oehler home in Carmel.

Eric Oehler and his wife, Kathy, sang in the church choir and Indianapolis Opera.

“Singing was unavoidable at our house,” Cameron Oehler said. “It’s a good thing we liked it.” 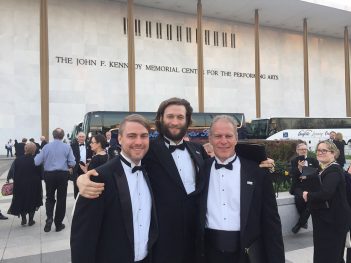 Eric and sons Cameron and Ian are all tenors in the Indianapolis Symphonic Choir. “The Festival of Carols” is set for 8 p.m. Dec. 20 and 3 p.m. Dec. 21-22 at the Palladium at the Center for the Performing Arts. The 180-member choir will feature arrangements of holiday classics and will be joined by the Indianapolis Chamber Orchestra, along with guest soloist and Butler graduate Michele McConnell of Broadway’s “Phantom of the Opera.”

Eric, 68, met Kathy in a choir at Syracuse University.

“We dragged the kids along to Indianapolis Opera rehearsals, and the kids were in a couple of different operas with us when they had children in the choir,” Oehler said. “A couple of times at Christmas, we sang the NSYNC ‘O Holy Night’ with my daughter (Kara).”

Eric and Cameron are in their seventh year with the Symphonic Choir. Ian joined a year later. Cameron and Ian live in Indianapolis.

“I’ve sung since fifth grade,” said Eric, who moved to Carmel in 1979. “My wife (Kathy) and I were both in an opera company for 20 years. I sang at Christ Church. My wife and I were church musicians, section leaders and soloists.”

Cameron, 38, said there are several reasons he enjoys singing with the Symphonic Choir

“Partially because it’s fun to sing with dad and Ian, and it’s just fun in a big group with a big orchestra and do these great works,” Cameron said. “It’s exciting. There are many ways to get to do that kind of thing.”

Cameron, an Indianapolis resident, was in the Singing Hoosiers at Indiana University and was a member of the Ambassadors, Carmel High School’s mixed show choir. He was in the Indianapolis Children’s Choir when he was younger.

“There was a time before I joined the Symphonic Choir and after college when I was not in a choir,” he said. “I definitely feel I missed Christmas music without having a choir to sing in. I definitely love Christmas music. It’s always fun to do it.”

Indianapolis resident Ian, 34, was a percussionist in the concert and jazz band at CHS. He did most of his singing in church.

“I played in bands in college and then didn’t do much music except guitar playing,” Ian said.

Ian said he encouraged his father and brother to join the Symphonic Choir.

“I moved back to town and my mom was on the board of the choir,” Ian said. “I joined after they had been (in it) for a year. I let them test the waters. It’s nice to see each other every week. We see each other quite a bit, but there is always a lot going on. It’s different from normal stuff. It’s nice to sing next to each other.”