But this time, she’s with a special group in a special role. 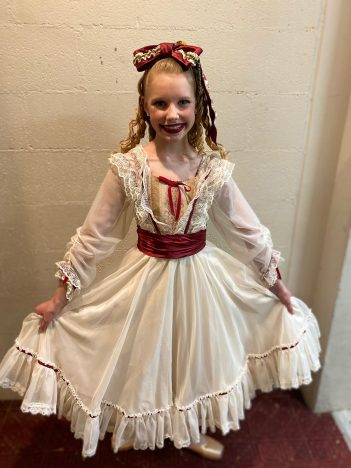 “I was in my first production of ‘The Nutcracker’ at age 7 with Expressenz Dance Center,” Grey said. “This was my sixth Nutcracker and first one with Butler Ballet. This one was special because I got to dance professionally with the Butler Ballet as one of the main characters, Clara.”

Grey was in seven performances in the Butler production earlier this month.

“The most rewarding part was dancing alongside the people that I look up to — the Butler Ballet dancers,”  Grey said. “I also loved performing and talking to the little kids after each show.”

Grey will perform as a Rose in Expressenz Dance Center’s “Nutcracker” Dec. 20-21 at the Pike Performing Arts Center. She previously had a variety of other roles in the production. The performances are at 6:30 p.m. Dec. 20 and 1 p.m. Dec. 21.

“I took my first ballet class when I was 3 (in Illinois),” said Grey, who normally practices 25 hours per week.

She has been training at Expressenz Dance Center, in north Indianapolis, since 2013.