Fishers resident Liz Smith didn’t order a 23andMe at-home DNA test kit with the same goal as most people. She wasn’t trying to connect with long-lost family members, but simply wanted to learn new possibilities about her medical history because her mother, Mary, was adopted as a baby.

Smith knew nothing about her medical history on the maternal side of her family,” Smith said. “I grew up knowing my mom was adopted, and she had a heart attack at 45, which is very young, so her doctors were adamant about her finding her family history. She tried, but because (the) adoption was sealed, she couldn’t find anything. I’ve had doctors ask me, ‘What’s your family history?’ And I can only give them half.

“I saw 23andMe had a health side of it to tell you precursors based on genetics, and I thought that’s the closest I’ll come to finding anything out.”

What Smith discovered, however, through the testing was something much bigger than she ever imagined.

“I had no idea it could potentially link me to family members,” she said.

When Smith received her results, she had a connection with a woman named Tracy Miller. 23andMe thought Miller was Smith’s first cousin, but she was actually her mom’s sister. Smith connected with Miller, and they figured out their connection.

“She said my mother was forced to give up a baby girl in Baltimore, which is where my mom was from,” Smith said.

Smith sent a photo of her mother to Miller, and the resemblance between Mary Smith and her biological mother, Helen, was uncanny.

Smith then learned her mother had three half-sisters and two half-brothers with the same mother but with a different father.

“They didn’t know my mom existed until 1998, when their mom was on her deathbed and said, ‘I need you to find her,’ Smith said. “My great grandmother was a very strict German Catholic, so when my grandma became pregnant with my mom, she was in love with my biological grandfather, but they were not married. She was forced to not be with him and forced to give up my mom for adoption.” 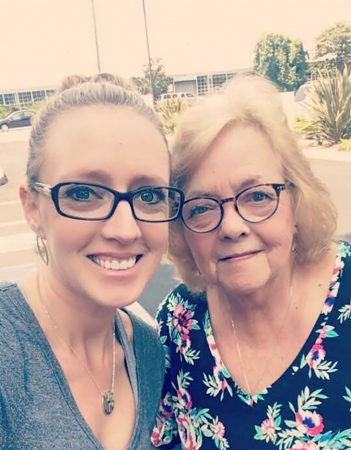 Miller signed up for 23andMe and has been searching for Mary since 1998.

After Smith told her mother what she had found, she participated in a four-way FaceTime with her mother, Miller, and two of her mother’s siblings.

The siblings talk frequently and are planning a reunion in Baltimore in the spring.

Smith has remained in touch with her aunts and uncles as well.

“I just think it’s amazing, and I’m hoping my mom will do (a 23andMe) because we still haven’t found her dad’s side,” Smith said. “They know his name, and I tried Googling him and couldn’t find him. I’m going to get my mom a 23andMe for Christmas, and I’m hoping we can fill that gap for her because she could potentially have brothers and sisters on that side as well.”

“My mom and all my aunts have the same nose,” Liz Smith said. “My mom has never looked like anyone. She’s never had the similarities, and they have so many. My uncle’s handwriting is so similar to my mom’s, and my mom has really distinct handwriting.”

Liz Smith lives in Fishers, and her mother Mary and brother Drew live in California. Some of her mother’s biological family lives in Baltimore, and she has a half brother who lives in Montana.