You are at:Home»Current in Noblesville»Noblesville Community»Tragic loss leads Sharpe to Noblesville position

Dave Sharpe gave up a good football coaching job at LaPorte High School because of a strong pull to move to the Indianapolis area.

Sharpe’s 9-month-old son, Jacob, died in June 2018. Sharpe’s wife, Kristen, became an advisory council member for Indianapolis-based Riley Hospital for Children. The move also helps the family’s Jacob Sharpe Foundation, which the couple founded with a goal of covering funeral expenses for families of young children who die at Riley. Jacob, who had 13 surgeries, died of dural sinus thrombosis, a blood clot in the brain. 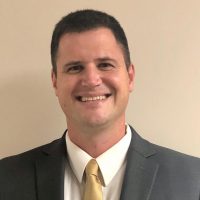 “Losing a child is a life-altering moment, obviously,” Sharpe said. “It’s an experience that you can’t imagine anything worse.”

After leaving LaPorte following the 2018 season, Sharpe landed a job as a Hamilton Southeastern High School teacher and became the football team’s defensive coordinator. When Noblesville coach Justin Roden resigned after the 2019 season, Shape applied and was recently hired as the Millers’ head coach. His final day at HSE was Dec. 20 and he starts as a physical education teacher at Noblesville Jan. 6.

“I think the world of (HSE coach) Adam Morris and (athletic director) Jim Self and this high school, but when the Noblesville job popped open, it seemed like a good fit for me,” said Sharpe, who lives in Fishers with his wife and daughters, Lindsey, 7, and Kate, 5. “Not being from Hamilton County, I don’t know much but (Noblesville) does remind me of LaPorte a little bit. It’s kind of an older town with a big courthouse, smack in the middle of downtown. It’s a one-team, one-town type of an atmosphere. I wanted that part of my life back. I missed the head coaching aspect the past year.

“I felt lost for quite a while (after Jacob’s death), but I found a good place at HSE, and now getting the Noblesville job, I’m getting my life back on track. It’s never going to be the same. Time does kind of heal wounds, and I’m feeling that now.”

“I believe in being really, really good at certain details and not being a jack-of-all-trades and master of none,” Sharpe said. “So, we’re going to have systems put in place offensively, defensively and special teams that we feel can really translate to lower (feeder system) levels.”

Sharpe plans to be involved with the youth league and the middle school programs.

“He’s had great experience at all the places he’s been and is very kid-centered,” Wooldridge said. “We’re going to build on fundamentals. Doesn’t matter your talent level, we’re going to find a place for you.”

Sharpe had a 26-17 record in four seasons at LaPorte. He previously coached John Glenn High School in Walkerton for two seasons. Football is in his bloodline as his father, Bill Sharpe, had a 288-54 record and four state titles at Jimtown High School before retiring in 2007. Sharpe, who was an offensive and defensive lineman at Jimtown, became an assistant to his father after graduating from college, serving as an assistant on his father’s 2005 Class 2A state championship team.

His father comes to Sharpe’s games and they talk afterward.

“I’ve always wanted my programs to emulate those Jimtown teams,” Sharpe said. “He won in a classy way.”

Noblesville plays in the Hoosier Crossroads Conference along with Hamilton Southeastern.

“It’s as good a conference as there is in the Midwest, and that’s what makes it appealing,” Sharpe said. “There never is going to be a cupcake on the schedule. We know that.”