You are at:Home»Current in Noblesville»Noblesville Community»36-year-old waits for heart at Riley

Noblesville resident Steven Smith is waiting for a heart at Riley Hospital for Children, but there’s something unique about his situation.

He’s 36 years old in a hospital with mostly children. 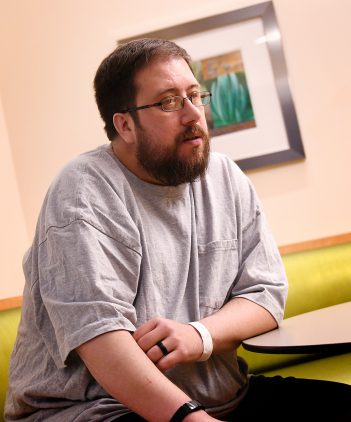 Steven Smith has been waiting for a new heart at Riley Hospital for Children for more than 15 weeks. (Photo courtesy of Riley Children’s Health)

Smith, who has had a congenital heart defect since he was an infant, has waited at Riley for more than 15 weeks for a heart.

Although he would prefer to be home, he said there are unexpected benefits to being a patient in a childrens hospital.

“There’s a lot of activities that go on here that probably wouldn’t go on at an adult hospital. You make friends with some of younger kids and help them out,” he said. “You play video games with kids and get to watch movies and do stuff like that.”

Dr. Mark Turrentine, professor of surgery and head of the hospital’s thoracic and cardio division, said there’s a specific reason Smith is a Riley patient.

“You have to look at it in two ways. There’s congenital heart defects and acquired heart disease, but then you also have the pediatric population and the adult population,” he said. “(Hospitals) used to be age-based. The pediatric hospital was for anyone 18 and under, and if you’re 18 and over, you go to an adult hospital, but the skillsets of the teams are different.”

“There’s this middle group (of patients) who grew up with congenital heart disease and are reaching adult age. Who can best care for those defects? The congenital heart surgeons are the ones who can take care of them the best, and they tend to be based more at pediatric hospitals,” Turrentine said. “If (the adult patients) start to have a lot of other problems in addition to the congenital heart problem, we move them over to Methodist (hospital) because they’re better suited for it.