You are at:Home»Current in Zionsville»Zionsville Cover Stories»Looking ahead: Zionsville’s new mayor and her plans for the next four years

In November, when the final vote tally was announced,  a group of supporters in Greek’s Pizzeria in Zionsville erupted when Democrat Emily Styron, was elected as the town’s new mayor.

Styron won by a narrow 88-vote margin, just enough to beat the incumbent Republican incumbent Tim Haak,  the result of Styron and her supporters campaigning throughout town for six months, appealing to Democrats, Republicans and independents. 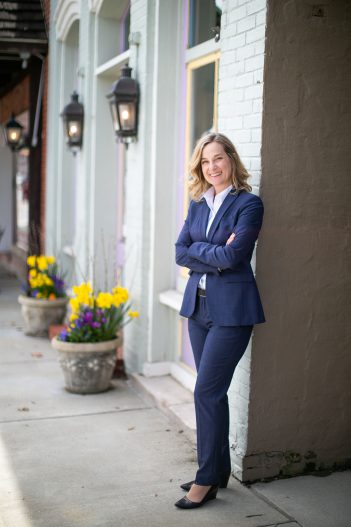 “What I heard was people explaining to me, that from their perspective, the work that happens at the local level isn’t an ideology-based consideration,” Styron said. “What our community was looking for was someone who understood the problems that we have, that had experience addressing similar organizational infrastructure problems and that had ideas to help identify and address the problems that Zionsville has been facing.”

Styron said her campaign gave the town a chance to consider whether the challenges Zionsville has encountered in recent years are the results of problems intrinsic to the town or leadership that has stymied its potential.

The key aspect Styron said she wants to tackle is that of economic growth by means of a more robust economic development program. The town, she said, has failed to attract enough new business to Creekside Corporate Park, an office park built in Zionsville’s woodlands.

Although the town recently announced Group 1001 acquired the former Lids Inc. headquarters building in the park, Styron said more can be done to attract more businesses.

Styron announced this month the appointment of Julie Johns-Cole as Zionsville’s next deputy mayor. Johns-Cole is a small business owner, nonprofit leader and community volunteer with more than 18 years of experience in management, economic development, municipal government, strategic planning and stakeholder engagement.

Other problems that have been identified but not addressed, according to Styron, include the lack of downtown parking, park amenities and infrastructure projects, all of which she said are “tied to a more vibrant and successful economic development program to be able to address them.”

But Zionsville’s new mayor, with the help of the deputy mayor, wants to make substantive inroads toward her objectives. One of the duo’s first initiatives will be to structure a 30/60/90-day plan that will be announced in early February. 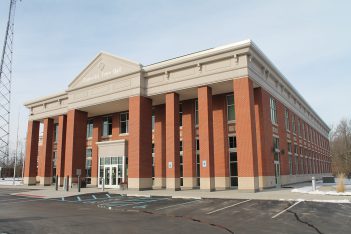 At Town Hall, Mayor Emily Styron wants to “identify and address the problems that Zionsville has been facing.” (Photo by Jarred Meeks)

As a part of that plan, Styron wants to create a mayor’s action center to serve as the primary location where residents can have their questions and concerns heard.

“We are going to realign the business of Town Hall so that it is public-facing versus our kind of silo way of doing business,” Styron said. “When you want to get something done, and you need to involve the town involved to do it, there is going to be a single place that you go to. And we are going to realign our departments around what the public needs, versus asking the public to figure out where they go to meet their needs.”

While the new administration waits to announce the fine details of its plans for Zionsville, town leaders launched a formal “Town Hall” transition team and process involving a group of subject-matter experts in various aspects of municipal government that will expedite the transition.

“We are committed to helping Zionsville achieve its full potential,” Johns-Cole said. “We will be working very closely with town leadership, the town council, business leaders and residents within the community to move things forward, and we look forward to that opportunity.”

Emily Styron started her public service career in 1995 as an executive in former Indianapolis Mayor Stephen Goldsmith’s administration after earning a master’s degree in public administration.

Later, as the chief financial officer for the Indianapolis Dept. of Public Safety, she managed a $170 million annual budget for the Indianapolis police and fire departments. In that role, she helped secure millions of dollars in federal grant money to support community policing and build new firehouses and police stations.

Her diverse experience led some Republicans to openly support the Democratic mayoral candidate in November.

“I think my career was particularly attractive for people who have consistently voted for Republicans in the past,” Styron said. “That led them to see that this person has proven that she isn’t an ideologue, that she can work in the Indiana government scene and be successful.”