You are at:Home»Current in Carmel»Carmel Community»Former Indy financial controller running in District 30

For the past 15 years, Fady Qaddoura has been a public servant.

First starting as an Indiana Senate and House intern, Qaddoura, 39, had a career focused on finance and now teaches his skills to others as an adjunct faculty member at IUPUI. Most notably, Qaddoura served as financial controller and chief financial officer for the City of Indianapolis and Marion County, balancing the annual budget. 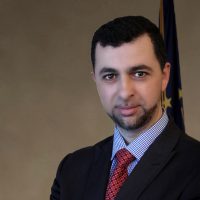 Now, Qaddoura, a Democrat, is looking to apply his knowledge as a lawmaker, seeking the District 30 State Senate seat in the May primary election. District 30 encompasses a majority of Carmel and Fishers’ southern halves as well as a chunk of north central Indianapolis. The seat is held by Republican John Ruckleshaus, who is seeking re-election.

“Indiana has the potential to lead the nation in several policy areas if we collectively work as one state, focus on the issues and think systematically about solutions,” Qaddoura said. “My education, deep understanding of public policy, expertise in municipal and state budgeting and finance, health care, higher education and ability to build consensus between Republicans and Democrats qualify me to serve effectively. I helped the City of Indianapolis balance the annual budget of $1.2 billion for three consecutive years without a tax increase, upgraded the city’s credit ratings, paid down debt and saved taxpayers over $60 million in smart-sizing initiatives.”

“More importantly, as a husband, a father of two daughters, an educator, a public servant, a survivor of Hurricane Katrina and a hardworking person who pulled himself out of poverty, I have the mind and the heart to serve,” Qaddoura said. “I am not interested in getting elected for the sake of winning an office. I am interested in making a positive difference in the lives of all Hoosiers. I envision a more inclusive, welcoming, prosperous and healthy state.”

Education: Bachelor’s and master’s degrees in computer science from the University of New Orleans, master’s degree in public administration from IUPUI, PhD in philanthropy and public policy from IUPUI

Career: Worked in the Indiana House and Senate as a policy and legal intern; as a policy analyst for the Dept. of Workforce Development; as a senior manager at the Indiana State Family and Social Services Administration; and as the controller and CFO for the City of Indianapolis and Marion County. Works as an adjunct faculty member at IUPUI teaching public finance.

Personal: Married to Samar. They have two daughters, Sajida, 14, and Salsabil, 11, who attend North Central High School and Sidener Academy.