You are at:Home»Current in Carmel»Carmel Community»South Bend family’s missing cat found in Carmel

Some might consider encountering a black cat on Halloween a sign of bad luck, but last year the Anderson family wanted nothing more than that. And their story could hardly get any luckier. 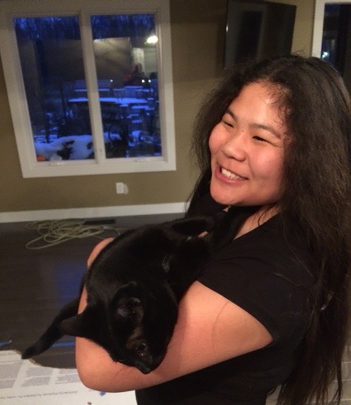 It all began in February 2019 when an oven malfunction resulted in a house fire that left their South Bend home uninhabitable and their cats unconscious.

“Thanks to the awesome fire department, our three cats – Michelle, Richard and Moondog – were found unconscious in our basement but were saved by mini-oxygen masks that had been donated by an animal lover to the South Bend Fire Dept.,” Mary Anderson said.

The cats recovered completely while staying at the Anderson’s rental house. The family stayed in Granger for eight months until moving back to South Bend on Oct. 31.

Movers from Carmel arrived to assist with the transition but left the door propped open, allowing the cats to escape. Moondog and Richard were recovered quickly, but to the Anderson’s dismay, Michelle was nowhere to be found.

“Michelle is kind of like a therapy cat for our daughter, Shari,” Mary Anderson said. “All four of our daughters were adopted from China, but Shari has always had ADHD and anxiety issues, so I was terribly upset when we couldn’t find Michelle.  I knew Shari would be devastated.”

The family spent Halloween night scouring the streets for Michelle.

“The girls and I went from house to house passing out fliers and asking everyone to be on the lookout for our cat. We were even more worried because we had heard that missing cats return to their last home, but we were no longer living in the rental, and we were 18 miles away from the rental,” Mary Anderson said. “Every night, we would drive out and look for Michelle. We put out cat food, pillows that smelled like us, and all the other things we read about online.”

“Michelle had been found in the warehouse where the rental truck was stored,” Mary Anderson said. “I could not believe this wonderful news, and my husband continued by telling me he was going to pick up Shari and drive to the warehouse in Carmel. It was a long drive from South Bend, but the people in the warehouse had cared for Michelle and given her food, and she was very happy to be back with her owner.

“We believe that Michelle ran out of the rental house on that rainy Halloween and right into the nice, dry truck. We were all thrilled to have our cat returned to us, but Shari was especially relieved. It was truly a miracle for our family.”