In the spring of 2018, Harmas said he learned he had been nominated by his peers  for Region 5, which covers Boone, Hamilton, Howard, Madison, Miami and Tipton counties. By collecting letters of recommendation and detailin his 35-year education career in a lengthy application process, Harmas was recognized as the Region 5 Principal of the Year. In October, at the annual IASP banquet, he was named the IASP Principal of the Year. 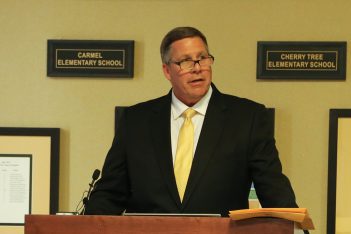 Harmas said he felt “shock and utter amazement” after receiving the recognition.

“The work that we do is really servant leadership work,” he said. “Especially for me, I never think the work that I have done is remarkable. It’s just what we do. We hope to create an environment where our kids and staff can be successful, where our parents and communities can feel good about our school. In that, you just get so busy in the work, you don’t see what other people may see.”

“To say one of us is better than anybody else is very difficult, because everybody’s circumstances are different, but it’s just a great honor to represent all principals in the state,” Harmas said.

Harmas will travel to Washington, D.C. to take part in the National Association of Secondary School Principals Recognition Program. He is a candidate for Principal of the Year at the national level through an application and interview process.