Every day for more than a year, Geoff Davis has been working out of a small basement just off the square in downtown Noblesville. Nearly every inch of his studio is covered in tools, wood and signs, along with a wall of jars filled with assorted hardware.

Davis is an industrial artist. He creates carved birds and duck decoys, pull toys and ukuleles.

His storefront window at 92 S. Ninth St. features an array of finished pieces in a snowy display.

Davis, who also teaches classes, previously worked from a studio in his home on Hannibal Street, but he moved closer to the square to expand class offerings. Above his studio is Caravan Classes, a business that offers pop-up and in-house art classes, workshops and parties. In fall 2019, Davis was named Artist of the Year by Nickel Plate Arts, and Caravan Classes co-owner Deanna Leonard was named Art Educator of the Year.

Davis was an elementary school teacher for three decades for Indianapolis Public Schools before delving into art full time.

“I’m not really retired. I have a problem with that word,” Davis said. “I retired from teaching and I draw a tiny pension, but I work more hours than I ever did. I make a lot less money, but I’m doing what I want to do. I’m much happier. All of the anxiety is gone. The things (teachers today) are protesting against are the things that pushed me out of teaching. It had a lot to do with mental health.

“The anxiety of teaching is unreal, especially at an inner-city school. Pressures from above to perform, pressures from parents to act a certain way, not ever being able to be in your own head.”

As his own boss, Davis has flourished in his new space, teaching classes on how to make ukuleles and cigar box ukuleles along with offering bird carving, decoy and leather classes. He also teaches fundamentals of woodworking, along with other skills.

“Monday nights are open-studio, and those are fun because people come in for two hours to work on whatever projects they have, and I help them out, but I’m never sure what’s coming in the door,” he said. “What seems to be the biggest joke is, ‘Do you have all your fingers?’ I do. I’ve cut deeply into all of them, but I have them.”

Active in the Noblesville arts community since he moved to Old Town in 1986, Davis said his goal is to promote all things local and traditional.

“There are two things that drive me. One is making things and the other is teaching people how to do it,” he said. “We’ve evolved to make and create things. Originally, we had to procure food, water and shelter. Over the years, as things have become more modernized and mechanized, our needs are pretty well taken care of, but we still have that innate drive to create things and to solve problems.

“I find it so rewarding, and I really believe that everybody needs that. There’s a huge level of satisfaction associated with it.”

Helping people develop artistic skills is among his most rewarding byproducts of teaching.

“Just the other day, a woman finished building her ukulele, and I’ve never seen so much pride,” Davis said. “She did it, and she felt amazing. I don’t think we challenge ourselves enough to make things and solve problems and use our hands. When people come in, they’re always shocked at how far they can go with what they have. I really enjoy getting people through that process.” 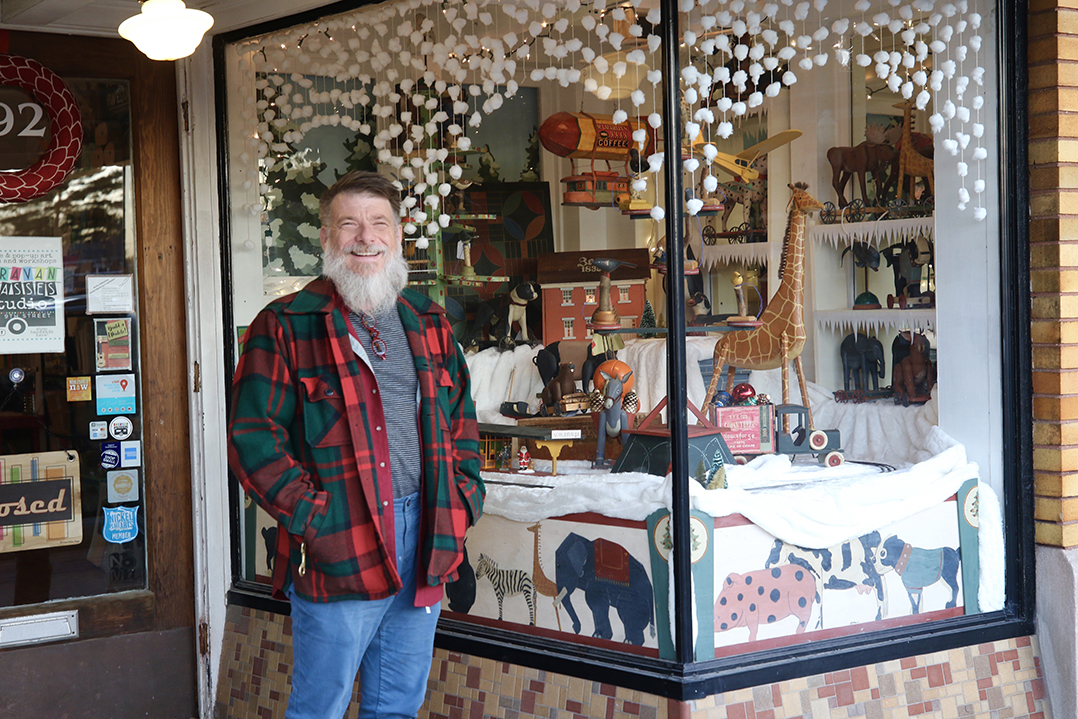 Geoff Davis is an industrial artist in downtown Noblesville.

Geoff Davis is 57 and has been married to Julie Davis for 30 years. They have four children and two dogs.

“I’ve lived in Noblesville since ’86,” Davis said. “I grew up in Carmel, and I hated the out-of-control development, so we moved to Old Town. I bought a house from 1889 and I started to restore it. I always thought once I made the move to restore the house, other people would follow, and they are now.

“It took them 30 years, but now people are buying these messed up old houses and restoring and flipping them.”

In addition to creating visual art and building ukuleles, Davis also plays the instruments and gives lessons at the Palladium in Carmel twice a week. Learn more at thecenterpresents.org/learn/teen/ukulele-class.