You are at:Home»Current in Zionsville»Zionsville Cover Stories»New you: How one woman lost 180 lbs.

Katherine Eckart lives in Broad Ripple, but she wakes every Monday, Wednesday and Friday at 4:20 a.m. to drive to Zionsville’s Indy Max Impact gym.

By 5 a.m., she’s sweating, burning calories and has kick-started her morning. When her workout is finished, she drives home in the dark to shower and prepare for her workday. Her routine has been the same, with the addition of 8 a.m. Saturday workouts, for three years and is part of a six-year commitment to gym life.

The only difference between Dec. 28’s Saturday morning workout and one from six years ago is the 180 pounds she has shed from her body.

Along with a couple dozen other women, Eckart, 31, wearing black leggings and a fitted black tank top, walked into Indy Max Impact, an all-women boot camp gym that incorporates strength training and cardio elements, to start her morning workout. Before, she would have hidden behind baggy clothes that didn’t cling to her body. She would try to hide in the background away from others.

Now, she is greeted by the other women who have come to be friends – some of her closest friends, even if they only see each other during workouts. They are part of her support system.

“Whenever there was a moment when I wasn’t showing up as consistently and not progressing like I was, they’d check in, and that was something that I needed,” Eckart said.

Eckart teaches art to kindergarten through eighth-grade students at St. Joan of Arc School in Indianapolis. Her fitness journey began when she realized she couldn’t keep up with the younger children she was teaching after graduating from college the previous year. They would easily outpace her, and she knew it was because of her weight. So, she joined a gym. At first, she said the weight quickly came off. Gradually, she lost 80 pounds in three years.

But then the weight stopped coming off (at least permanently – she would lose 20 pounds and gain it back just as fast). Her gym routine had lost potency, so she searched for something different, something that would hold her accountable. She found what she was looking for at Indy Max Impact.

Indy Max Impact creates new workouts for members every time they visit. One day might involve squat racks and battle ropes. Other days might involve cardio drills and teamwork. The morning starts with five stations, and Eckart’s group starts with a series of mountain climbers, plank jacks and push-ups before switching to a station dedicated to ladder runs and weighted jumping jacks.

When her weight loss plateaued, Eckart started to consider whether variables other than the time she spends in the gym could be contributing to her struggles. After meeting with Zach Williams, a co-owner of Indy Max Impact, she realized her diet needed to change if she was going to keep off the weight. She began counting calories and tracking macro nutrients – proteins, carbohydrates and fats. During the following three years, she lost another 80 pounds.

Now, Eckart — a newlywed whose husband is Ross — can complete an entire workout that consists of burpees, clean and presses,and running (something she does a lot of these days, as she runs the Indianapolis Mini Marathon every year). She said she has changed internally, too, not just physically. She pushes herself and doesn’t give up on her goals. She feels more confident. She states her opinions. She doesn’t blend into the background. 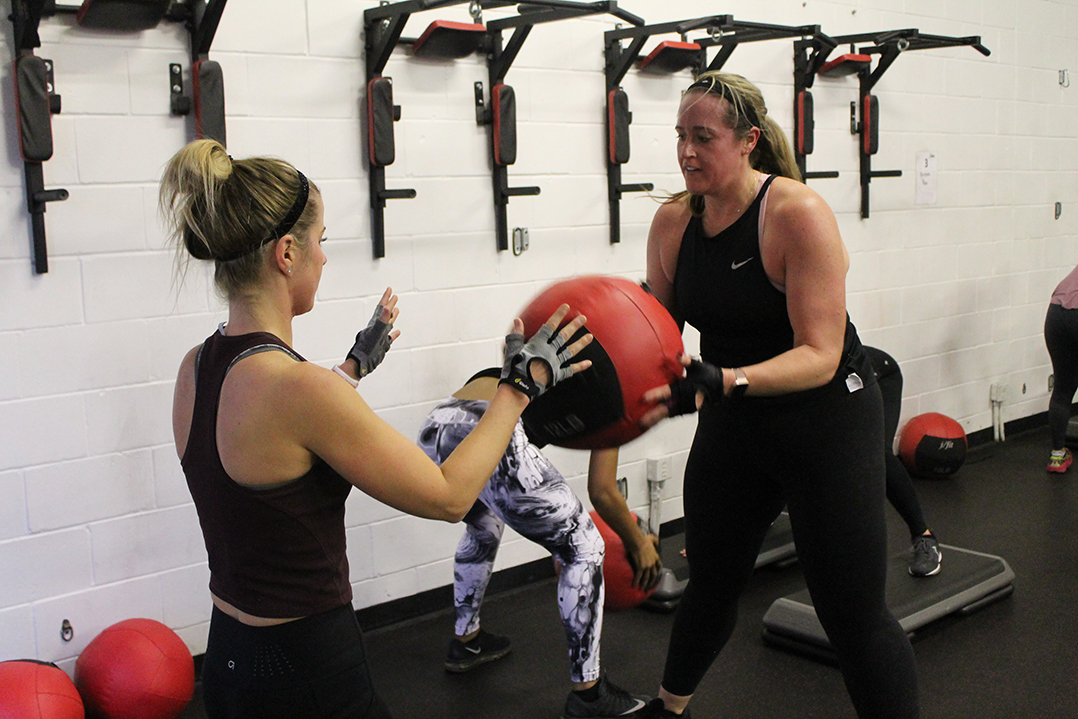 Indy Max Impact co-owners Zach Williams and his wife, Waychaun Williams, decided several years ago that they wanted to be in better shape.

The couple set a goal of competing in separate competitions – a bodybuilding competition for him, a fitness competition for her. They started going to the gym consistently and convinced two others to join them for their workouts. The four conceived new circuit-based workouts they could all do. Zach placed third in his competition, and Waychaun took first place in hers.

But it was the camaraderie and team atmosphere the four shared in the eight-month build-up to their competitions that they enjoyed the most. And when people continuously asked them how they got in such great shape, they decided to become personal trainers.

They eventually grew a following from referrals and offered fitness boot camp classes in a dance studio during the summer of 2013. At the end of that summer, they found a location, at 10659 Andrade Dr., where they could conduct boot camp classes for women on their own schedule and have a dedicated space for equipment and training.

“It’s for people who are serious and willing to make serious change so they can see serious results. It doesn’t matter if they are brand new to fitness or an elite athlete looking to take their fitness to the next level.”