“Thirty years is a long time to be anywhere,” said Lasley, who celebrated with a surprise gathering Jan. 8 at The Tarkington at the Center for the Performing Arts in Carmel. “It’s not common in the performing arts to be in one place 30 years.” 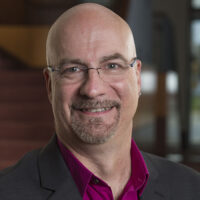 Lasley started as a sound director and carpenter at Civic.

“There is literally nothing in the world of theater I haven’t done here,” Lasley said. “I became sort of a permanent fixture here in 1997. I’ve worked on every single show at Civic Theatre since the fall of 1997.”

Lasley is nearing the end of his fourth year as executive artistic director. Prior to that, he was a producing director and head of the production department.

One of his most memorable experiences was meeting his wife, Marni Lemons, in 1991 when she was performing in “42nd Street.”

In 1987 as a Ball State student, Lasley visited New York to see “Les Miserables” the week it opened.

“I thought I could not wait to do that show,” he said. “Little did I know it would be 27 years from that time before we ever got a chance to do that. In 2014, we did ‘Les Miserables’ on The Tarkington stage. That will always be one of my favorite memories.”

Lasley played the role of Zach in Civic’s production “A Chorus Line” in 1993.

“That was the first time I was on the Civic stage and I did a few couple of minor things, fill-in roles here and there,” Lasley said.

Civic moved into the Center for the Performing Arts in 2011.

“It elevated our game as far as technical aspects we were able to do,” Lasley said. “We’ve been expanding the options as far as shows we do when we moved up here. We’re pushed by our patrons in Carmel to do newer and more exciting pieces of theater.”

Lasley, an Indianapolis resident, said 50 percent of the audience comes from Hamilton County and Zionsville.

“This organization wouldn’t have this beautiful theater with accoutrements and technical quality without Michael,” said D. Peter Dunbar, who was chair of the board from 2010 to 2012 and is now an honorary trustee. “He stepped in and helped Pedcor design this theater to make sure it would meet the needs of Civic Theatre and our actors and our audiences.

“Michael has done a phenomenal job. We’ve never been more successful from number of audience members (and) revenue than we have since Michael has taken over as executive director.”