You are at:Home»Current in Carmel»Carmel Community»Former Carmel VFW post commander accused of using hidden camera in bathroom to record teen

A former commander of the Carmel Veterans of Foreign Wars Post is facing federal charges after allegedly using a hidden camera to capture images of a 14-year-old female in a bathroom at his home. 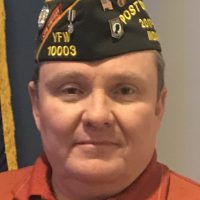 McDanield is facing seven counts of sexual exploitation of a child and one count of possession of child pornography in the U.S. District Court Southern District of Indiana.

According to an affidavit, a relative of McDanield’s who was at his home for the holidays contacted the Carmel Police Dept. Jan. 2 after finding what appeared to be a hidden camera in a bathroom in the home on Dec. 23, 2019.

The relative told police the device had a camera lens that was pointing toward a sink and shower and was placed in a bathroom primarily used by a 14-year-old female. The affidavit states the relative also told police that he or she had observed a similar device in McDanield’s home two years earlier.

The relative told police McDanield said the device was a WIFI extender that needed to be in the center of the home. Not long after the confrontation, McDanield locked himself in the bathroom for approximately one hour, and the device was gone after that, the affidavit states.

The 14-year-old female told the relative that she found the device a number of times and had placed it in a dresser drawer, the affidavit states, however it would reappear in the bathroom.

During an interview with investigators, McDanield admitted to using the hidden camera to capture images of the teen, and he admitted that he was sexually attracted to teenagers and used the internet to obtain “child abuse material,” the affidavit states.

A search of McDanield’s home turned up an external hard drive with several files sexually depicting the 14-year-old girl, the affidavit states. She appeared to be unconscious in several of them.

Investigators also found additional child pornography files on the hard drive, including other homemade videos and images suspected to involve the teen.

“We were shocked and frankly disgusted to hear of the cause for the investigation of one of our state level leaders,” Capshaw stated. “While this remains a fluid situation, this individual has been prohibited from participating in all VFW activity.  We will continue to fully cooperate with the authorities during their investigation.”

Current has reached out to McDanield’s attorney for comment.