A Noblesville woman is doing her part to ensure cursive writing remains a staple of public school curriculum.

After researching the issue, Mac Innis learned cursive was eliminated from school curriculum in 2011.
Mac Innis then discovered that State Sen. Jean Leising (R) was championing a cause to reintroduce cursive as a requirement.

“I had the opportunity to talk with her for about 45 minutes on the phone,” said Mac Innis, noting that Leising introduced a bill seven years ago requiring cursive to be taught in elementary schools.

The bill didn’t pass in the House of Representatives.

Leising hasn’t given up on the effort, and Mac Innis has decided to help her.

“We’ve kept in contact, and I’ve offered to help anyway I could,” Mac Innis said. “I also brought it up with coffee with (superintendent) Dr. (Beth) Niedermeyer a few years ago and didn’t get much response.

“I learned there are so many things the teachers are required to teach, and you can see this every day – teachers having to take over so much of what used to be done in the home, but there are unintended consequences of not knowing cursive, and that is what I am trying to bring to everybody’s attention.”

Mac Innis recently came across two cases in which local residents were negatively impacted by not knowing cursive. In one example, a local post office employee told Mac Innis that several passport applications were denied because high school students didn’t know how to sign their names in cursive. Another example was of a Noblesville employer who wrote a note of praise to a student for a job well done. The note was written in cursive, which the student couldn’t read.

“Many children don’t even know how to sign their name in cursive for legal documents,” Mac Innis said. “We have got to think creatively if the teachers are being inundated with so many things to pack in their day. We have to think, ‘OK, how can we work this out?’ so that it’s not just abandoned.” 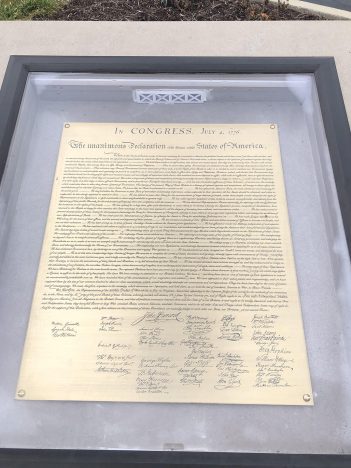 Patty Mac Innis said some students are unable to read the Charters of Freedom at Federal Hill Commons because the documents are written in cursive. (Photo by Anna Skinner)

“Unfortunately, the ability to read these documents has been eliminated for our young people who are now between the ages of 9 and 17 years old.”

Some schools still teach cursive while others don’t because the lessons are no longer required to be taught in Common Core curriculum.

Noblesville Schools released the following statement about its stance on teaching cursive.

“Our curriculum continually evolves as society’s needs change and the sheer volume of what is expected to be taught in schools has increased significantly over recent years without an increase in instructional time. There are a lot of subjects we wish we had time to make available for students, but unfortunately curriculum choices have to be made,” the statement read. “Being able to sign one’s name is clearly important, but reading and writing cursive is not a workforce priority for today’s careers and therefore is not a focus for us. As the state no longer requires cursive instruction in schools, we encourage parents who feel this is important to practice cursive writing with their children at home.”

Patty Mac Innis is doing her part to ensure her grandchildren can read and write in cursive even thought it is no longer a required part of school curriculum.

“I’ve made a vow,” she said. “I have seven grandchildren and two are in college. During their first year of college, I wrote a letter every week in cursive on nice stationary about all the changes a freshman in college is going through. I tell them they don’t have to write me back, but the letters are in cursive and they have got to know how to read these letters.”