You are at:Home»Current in Zionsville»Zionsville Cover Stories»From the feet: Reflexologist expands business in Zionsville

Until five years ago, Ingrid Schwegler was a biochemist in the pharmaceutical industry for 20 years until. She switched professions when she observed a disconnect between medicine and peoples’ stress levels.

A native of Switzerland, she quit her job and went on to become a reflexologist/reiki master at her business, From Seed to Bloom.

“I took training 30 years ago in Switzerland in reflexology but never worked with it,” she said. “I just started rediscovering it. I retook the whole training in the U.S. because I wanted to make sure I was compliant with the expectations here.”

Schwegler is one of six nationally certified reflexologists in Indiana. She has operated her business for four years, including 3 1/2 in the Village of Zionsville. She recently moved her business to 1537 West Oak Street in Zionsville.

“Reflexology works with the nervous system, so you know when you get stressed, as we all do, the body cannot really repair itself anymore, and that’s when we start having chronic pain like headaches, migraines, back pain, and we start having mental health issues like anxiety, panic attacks, depression, and we start having autoimmune issues like fibromyalgia, lupus, Crohn’s disease, because our body doesn’t really repair itself,” she said. “The goal of reflexology is to take the body down a couple of notches.”

Reflexology is a process in which the reflexologist applies pressure to the feet or hands, and the pressure then sends a calming message to the central nervous system, which then signals the body to adjust the tension level.

“I start by working on the feet, and it’s a very specific technique, and I just rebalance your body through your feet,” Schwegler said. “Every part of the body has a point on one foot or both feet, depending on the organs. With my thumbs, I stimulate those points on the feet, which sends a message to the brain, which then talks back to the body and says, ‘Hey, it’s OK to relax.’ The treatment induces relaxation so the body can repair itself.”

Schwegler offers appointments of 30 minutes, one hour and an hour and a half.

For new patients, Schwegler completes an assessment and then explains reflexology treatment.

One of Schwegler’s patients, Christie Clark, was always interested in reflexology and began visiting Schwegler for treatments.
“I used to live in Santa Fe (N.M.) and did a lot of holistic type of healing, and reiki and reflexology were some of the things I heard about,” said Clark, who lives in Zionsville. “It was something I had heard about as an ancient technique for healing and stress relief, and it just made sense to me.”

Clark has been visiting Schwegler’s practice two to four times a month for three years.

“I can’t imagine ceasing that practice,” she said. “It has been one of the most fulfilling aspects of my wellness journey. I always leave feeling more centered and motivated, and I appreciate her mindful attention, all the insight she gives and the peace that comes from it.” 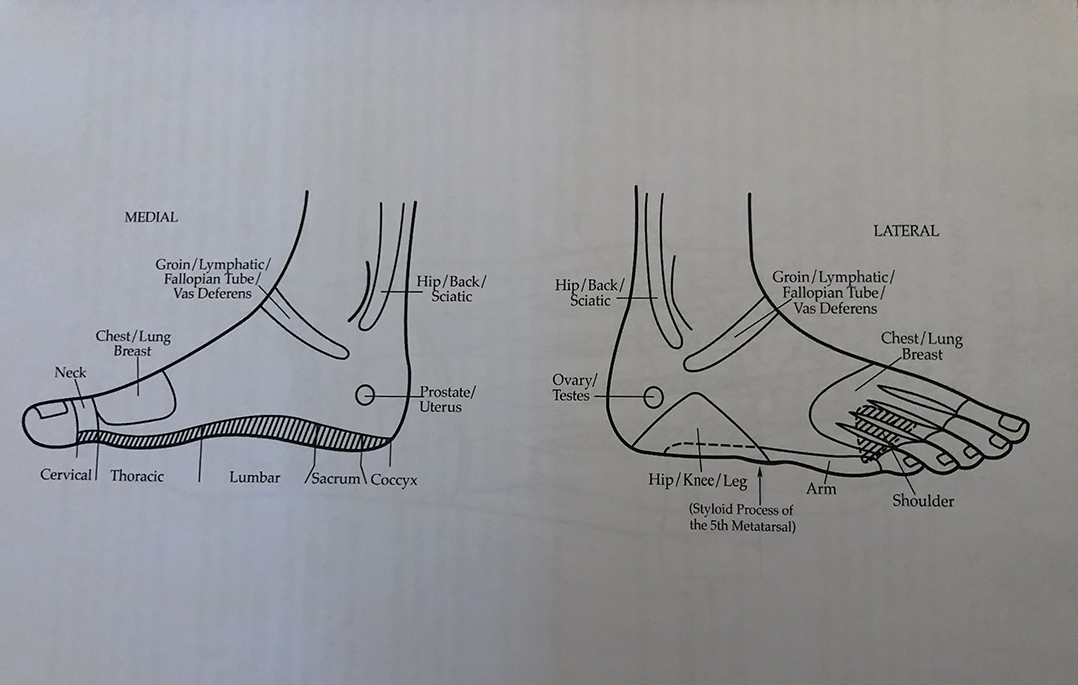 A foot map of how pressure applied during reflexology helps other problem areas in the body.

She also offers other techniques, such as reiki, which is a gentler treatment that also uses touch. Schwegler offers aromatherapy with essential oils treatment.