You are at:Home»Current in Geist»Geist Community»Poet laureate program goes strong for 8 years

Liza Hyatt launched the Arts for Lawrence Poet Laureate Program roughly eight years ago, and the group has been going strong ever since. 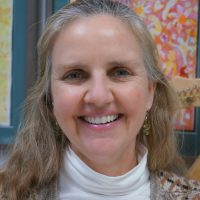 The monthly gathering features a poet and sometimes fiction writers. The presenter reads their work for 30 to 40 minutes, followed by an open reading where attendees can share their writing.

The group meets on the fourth Tuesday each month from 7 to 9 p.m. at the Sterrett Center, 8950 Otis Ave., Lawrence.

“The poets that we have are regional poets that are published and some of the best poets in Indiana,” Hyatt said. “Unlike other poetry readings around town, it’s a more intimate gathering, so we are often having dialogues with the reader, asking questions and interacting with the featured reader. People give encouraging feedback to each other when they share their own work. It’s a dedicated group of writers that are the core group that show up, but it is open to anybody who wants to learn about Indiana writers or grow in their own writing process. They get encouragement and community as a writer.”

The event is free, includes refreshments and doesn’t require an RSVP.

When Hyatt learned about Arts for Lawrence, she wanted to do something with the group, so she launched the poetry reading program.

“I had been wishing there was an arts community in this area the whole time I’ve lived here, since 1992,” Hyatt said “I am a poet, but I was a mother of a young child and couldn’t drive all the way to the other readings on the other side of town and fit that into my busy schedule, so I thought what can I do locally to make something happen here?”