John Kern has been eager to make his Shakespeare debut.

“It was something I wanted to do to grow and stretch as an artist,” Kern said. “I’ve seen a lot of Shakespeare in my time being in the arts community, having watched friends perform.”

So, Kern auditioned for Civic Theatre’s “Much Ado About Nothing.” 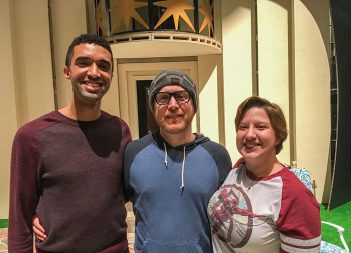 From left, Jonathan Doram, John Kern and Kelsey Van Voorst pause on the set of “Much Ado About Nothing.” (Photo by Mark Ambrog

“I thought I’d get a small role and dip my toe into the Shakespearian pool, and I guess I had a good audition because they gave me one of the lead roles,” he said. “So, I’m jumping in feet first in the deep end of Shakespeare.”

Kern will play Benedick in the production, which runs from Feb. 7 to 22 at The Tarkington at the Center for the Performing Arts in Carmel. Kern said he has some similarities with the character.

“At first, he’s tricky and doesn’t want to get married. Love is that thing he keeps at a distance,” Kern said. “In my life, I can relate to that as a 42-year-old single man. I’ve kind of kept love at a distance. As I’ve gotten older, I’ve tweaked the relationships in my love life, too. It’s been an interesting part to bring some of myself into the character.”

Kern said the Shakespearian dialogue is a challenge.

“It’s a lot more difficult to memorize, especially when you’ve never done it before,” he said. “I’ve enjoyed it and (am) relying on some of the people who have done it before here and some of the friends I’ve seen do Shakespeare. It’s been an experience.”

Kern, a Geist resident, is performing in his first Civic show in approximately seven years.

Prior to that, he estimates he had performed in a dozen productions with Civic. Kern recently started as an improviser with ComedySportz Indianapolis, another way he grows as a performer.

Carmel resident Jonathan Doram is making his Civic Theatre debut performance after moving from Arkansas, where he worked for Teach for America.

“I’ve never done Shakespeare before,” Doram said. “They needed a singer. I auditioned and got the role.”

Doram will play the roles of Balthazar and the Watch.

“I play the singer and military friend and I also play the Watch to keep order in the town,” Doram said. “The show is like the Renaissance version of throwing shade, so it’s very funny, very witty.”

In contrast to Kern and Doram, Kelsey Van Voorst, a 2008 Carmel High School graduate, is a Shakespearian veteran who is playing Dogberry in the production. Among other shows she has done, the Carmel resident appeared in Civic’s “The Complete Works of William Shakespeare (Abridged)” in 2017.

“The role of Dogberry is the comedic relief in a comedy,” Van Voorst said. “So, I get to be extra goofy. I can use physical comedy to my advantage. I don’t have a lot of restraint on how silly I can be.”

Dogberry was written for a male actor.

“So, the juxtaposition of me being a woman playing it is very fun, too,” Van Voorst said. “The role of Dogberry is well known. It’s very fun to say I got to play Dogberry.”

“From then on, Dogberry and his compatriots drive a lot of the plot for the rest of the show,” she said.