You are at:Home»Current in Zionsville»Zionsville Cover Stories»Helping Down Under: The Salty Cowboy joins effort to save Australian wildlife

Employees at The Salty Cowboy, a local tequileria, were devastated by the images they saw of the Australian bushfires that have ravaged the nation’s wildlife and natural habitats, and were determined to help.

The tequileria recently announced it will donate all of proceeds from each of its Australian Wild Berry margaritas sold through the end of this month. In January, the Salty Cowboy began a promotion that sent $1 of each sale of the same margarita to the Australian wildlife rescue organizations Adelaide & Hills Koala Rescue and WIRES Wildlife Rescue. 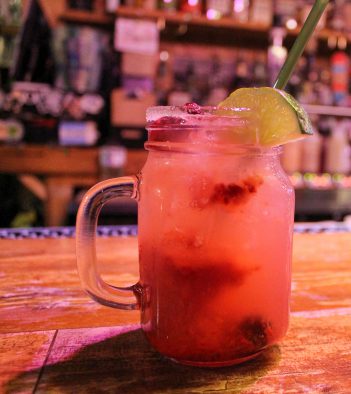 The Salty Cowboy will donate all proceeds from its Australian Wild Berry margaritas sales to Australian wildlife rescue agencies dedicated to curtailing the Australian bushfires.

But tequileria staff decided to re-up their commitment in late January by donating all proceeds of each Australian Wild Berry margarita sold this month to the wildlife rescue agencies.

Australia has bushfires each year, but the 2019-20 season brought unprecedented devastation, according to the Center for Disaster Philanthropy. Bushfires started as early as June 2019 in some areas and they continue to ravage the countryside during what is now Australia’s summer.

The bushfires have burned away large swaths of animal habitats, generating international media coverage and rescue efforts. Professor Chris Dickman, from the University of Sydney’s Faculty of Science, has estimated the bushfires have led to the deaths of more than 1 billion animals in Australia this year.

Because of the severity of the disaster, experts have said some species may have been effectively driven to extinction because of the bushfires.

Salty Cowboy General Manager Jason Hughes came up with the idea of donating to the recovery efforts.

“We love animals at Salty. The owner, Shari (Jenkins), and myself have a huge soft spot for animals,” Hughes said. “And I’m not going to lie, I love my Instagram and social media and Facebook and whatnot, and just seeing those photos was devastating. I felt helpless, like there was nothing I could do. After talking, we decided we had to do something.

“We obviously couldn’t hop on a flight to Australia anytime soon, but the best option we had was to give back in a way of a margarita, so we figured, ‘What better way (than) to donate some of the proceeds to some of the animals that are suffering down in Australia?’ This is us doing our part.”

The tequileria already donates a dollar from each Dog-gone-good margarita sold to IndyHumane in Indianapolis, which finds owners for homeless and abused cats, dogs and other animals.

“I think with the fire tragedy going on, it’s kind of a no brainer,” Salty Cowboy Manager Calvin Reynolds said about the decision to donate proceeds to relief efforts. “We posted on our Facebook and Instagram, and we’ve had nothing but positive feedback about it.”

But as relief efforts continue and death tolls climb for animals and humans (media reports list the human death toll at 34 as of press time), Hughes said he fears the public’s attention to the Australia bushfires will wane.

“Obviously, the fires will subside at some point, but I think people tend to read something online and it tends to be like 15-minutes-of-fame news and then just move on,” Hughes said. “I think (the promotion) is one way to keep it on people’s minds. Although the fires will end, the animals will need (help).”

Her affinity for animals, particularly rescues, led her to the decision of donate a portion of proceeds from The Salty Cowboy to IndyHumane in Indianapolis.

“There are so many dogs and other animals that are in Humane Societies and in foster homes that need a loving home,” Jenkins said. “I believe in adopting and not paying for a breeder.”