You are at:Home»Current in Fishers»Fishers Cover Stories»Learning a language: HEPL launches ENL class

People from nearly 20 nations are learning how to improve their English through an English as a New Language class established by Hamilton East Public Library in Fishers, 5 Municipal Dr.

Public Engagement Manager Jennifer Harmon said a class began in January 2019, and the program grew to two classes in August 2019.

“We started it just to have an English-learning and community-building program in our community, because not only are (participants) learning English through conversation, but a lot of them are making connections with one another,” Harmon said.

Between three to 15 people attend classes. Last year, combined attendance was 550. The classes, which meet at 7 p.m. Tuesdays and 10 a.m. Wednesdays, are organized by volunteers.

“The volunteers run it. We have two volunteers in the morning and between 2 and 4 (p.m.) in the evenings, and they’ve kind of taken off,” Harmon said. “They bring their own questions and just start conversations with (the participants). It’s all volunteer-led.”

Volunteers don’t have to have an education background or speak another language, but Harmon said many are teachers or former teachers.

The program offers support as well as English language skills.

“They’re meeting other people who are maybe new to the area or learning English, and I know a lot of them are connecting and forming a little group and helping each other outside of the library as well,” Harmon said.

Most of participants already know some English.

“We’ve had some come (that don’t know any English), but generally the people that stay know some English and are working on conversation skills, like confusing sayings we have in English or just saying the phrasing of something out loud to make sure they get it right,” Harmon said. “It’s a place to test their English in a safe place where someone can gently let them know if there’s another way to say something or if they’re not getting a meaning right.”

The Wednesday morning group is even organizing field trips.

“We have field trips planned Feb. 5 to the police station after class,” volunteer Kathy Drury said.

Harmon said HEPL may eventually expand the class to the Noblesville branch. In addition to organizing classes, the groups conduct quarterly family gatherings where attendees bring food from their culture and introduce their children and spouses to one another. Participants don’t have to live in Fishers to take part.

Sometimes, even those visiting from foreign nations attend the group.
“We have had several people come who are visiting family and are only here two or three months, and they come to the group,” Drury said. “They ask questions, like how to handle the Indianapolis airport, how to handle kids’ fundraisers at school, and they need to know culturally how to do things like expectations at holidays, like how you do trick-or-treating or Thanksgiving.” 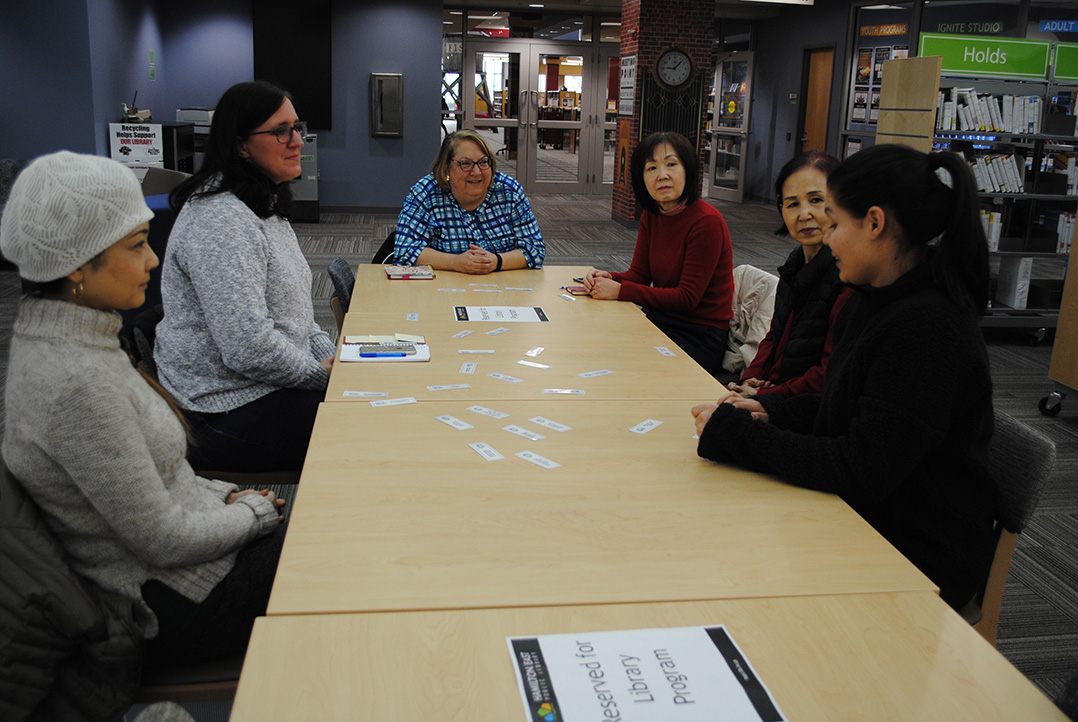 Many ENL class participants say they attend class to improve their English and meet friends.

“I want to see friends, and my conversation is improving, I think,” participant Ritz Kosht said. “We don’t speak English at the house, and here I can speak English and then they can correct my English.”