You are at:Home»Current in Carmel»Carmel Community»Klein’s candidacy leads to contested Democratic primary in House District 39

A first-time candidate for political office, a Carmel Democrat is looking to flip Indiana House District 39, which has been occupied by a Republican for 24 years. 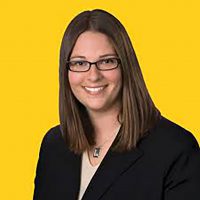 Ashley Klein isn’t the first Democrat to try to unseat incumbent Jerry Torr. She must first beat Mark Hinton, who, as of press time, is the only other Democrat running for the seat in the May 5 primary election. Hinton faced Torr in November 2018 and lost but earned 43 percent of the vote. Torr, as of press time, is the only Republican to file for the seat.

“Carmel needs a leader who will advance the values and interests of this welcoming and dynamic community and a legislator who will bring a fresh voice to issues we all care about – increasing resources for education, protecting the environment and improving Indiana’s aging infrastructure,” Klein said.

A former intern in the Indiana House of Representatives, Klein has held positions at various law firms as a commercial real estate appraiser and at United Way of Central Indiana, working with foster youth. She is a residential real estate broker at F.C. Tucker Co. in Carmel.

Klein graduated from Carmel High School in 1999 and from Purdue University with a degree in political science. She lives in the Eden Estates neighborhood with her three children.

“After the recent municipal elections, we’ve seen that Carmel residents are shifting as voters, recognizing one-party rule isn’t right for us,” she said. “We need to start putting the state of Indiana first on our nation’s report card rankings, and I’m hopeful that Carmel can help lead the way to a prosperous future for all Hoosiers.”