Camila Ferrera will be quite busy during the first act of “Love is in the Air.”

Indianapolis Ballet will present “Love is the Air” Feb. 14 to 16 at The Toby at Newfields in Indianapolis.

Act 1 will include “Rubies,” which is considered the most accessible ballet of George Balanchine’s “Jewels.” 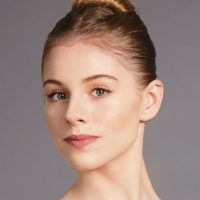 “That is a pretty big deal for our company because you have to be approved to get such a ballet to be able to perform it,” Ferrera said. “It’s a big honor to be able to perform. It’s a great work of choreography and the music is beautiful. It’s by Igor Stravinsky. It’s very fun. There is a lot of cardio involved.”

Ferrera said that is the most challenging piece of the program because she is cast for the principal couple part along with Riley Horton.

“You are dancing every part, so you are dancing for all three movements,” Ferrera said. “The second movement is your pas de deux (couple’s dance). There is a lot of jumping and dancing and super-dynamic movement and coordination with your partner.”

The second act is “Ania’s Song,” choreographed by Indianapolis Ballet Artistic Director Victoria Lyras. Thomas Beczkiewicz, co-founder of the International Violin Competition of Indianapolis, had commissioned a piece for Ania on her 60th birthday. Ania died after a short illness in June 2018.

“She choreographed it with the two couples, one in their youth and one in their maturity,” Ferrera said. “It’s a love story, which is fitting for this Valentine’s Day program.”

Ferrera isn’t in “Ania’s Song” but returns to perform in the third act of “Tango Forever.”

“Some things are brought back from the previous performances,” Ferrera said. “We had a tango program, and some of the tangos from that we are repeating in this collection of tangos, but others are brand new. There’s a women’s dance, a men’s dance, there is a trio, some pas de deux and some solos. The opening and finale, I’m sure, will include everyone. The tango is a stunning style of movement that is so difficult to look effortless. You have to feel the man’s breathing and breath with him in the same way, so you pick up on his body language and clues and see what makes the woman’s movement.”

Ferrera’s mother, Sonia Grimaldi, will attend from North Bergen, N.J. Grimaldi was a ballet dancer when she lived in Argentina and is well-versed in the tango.

“She’ll be coming for the show, so now she gets to see her daughter do it,” Ferrera said.