You are at:Home»Current in Zionsville»Zionsville Cover Stories»Closing time: Sycamore Street bridge shut down for repairs

A major access point in Zionsville closed this month, leaving some optimistic for the long-term benefits of the construction project despite short-term inconvenience.

The reconstruction project for the Sycamore Street bridge began Feb. 10. The project involves the reconstruction of the road bridge deck and bridge railing systems. It also will add new decorative lighting on the rehabilitated bridge.

The bridge is on Sycamore Street near Lions Park and spans Eagle Creek. The Boone County Highway Dept. is supervising the project.

The bridge, and all other bridges in the county, was inspected for deficiencies by DLZ, a design firm specializing in engineering, architecture and surveying. The bridge then was inspected by another agency which also deemed it deficient before the county decided to move on the project.

“We’ve had to reduce the speed on the bridge because the guard rails are deficient,” Santelli said. “The understructure is deficient. So, rather than have a firetruck fall through the bridge or have somebody hit ice on the bridge, go into those rails – they’re going to go off into the creek – our mission in Boone County, particularly with roads and bridges, is to have zero fatalities.”

The project was slated for an early 2020 construction date with the goal of avoiding the Christmas season, a prominent sales season for many businesses, Santelli said. He also said that the project, which is expected to last six months, couldn’t have been done in a way that avoided the summer months and the Christmas season. Because of the February start date, he said the Village was able to go through the 2019 Christmas sales season unimpeded.

Santelli said the project has been scheduled since 2015, when the county appropriated the necessary funds. But the town only recently sent a press release reminding business owners, which stirred frustration.

New Zionsville Mayor Emily Styron said she was not informed of the project by a transition team. She said the town distributed information about the project in the form of a press release the day after she first was informed of it at a county meeting.

“This was never mentioned,” Styron said. “This is a county project. The county manages the entire planning. The procurement, overseeing, (it’s) the construction team that does this. It presented a gap in terms of me knowing this was going to take place.”

Styron said she regrets any negative effects the project might have on local businesses during construction, but said the long-term benefits make it worthwhile.

“Clearly, I understand the frustration that the community has, because it does prevent a major entryway coming in to the town,” Styron said. “(It) will be closed, and we just opened up Zionsville Road. So the frustration, I share it, but all we can do as the Town of Zionsville is communicate what the county tells us.

“We don’t control the message or the plan, but we can help share the information as we receive it.”

During construction, the bridge will be completely closed to traffic. Detours will direct drivers in and out town via three other entry points: U.S. 421/Michigan Road, 106th Street and Main Street.

The trail system under the bridge connecting Lions Park to Creekside Park also will be closed throughout the project. However, the pedestrian bridge and trail system along Sycamore Street are expected to remain open with only periodic closures due to safety concerns, according to a press release.

The scheduled reopening date is Aug. 28, according to the town’s most recent update. 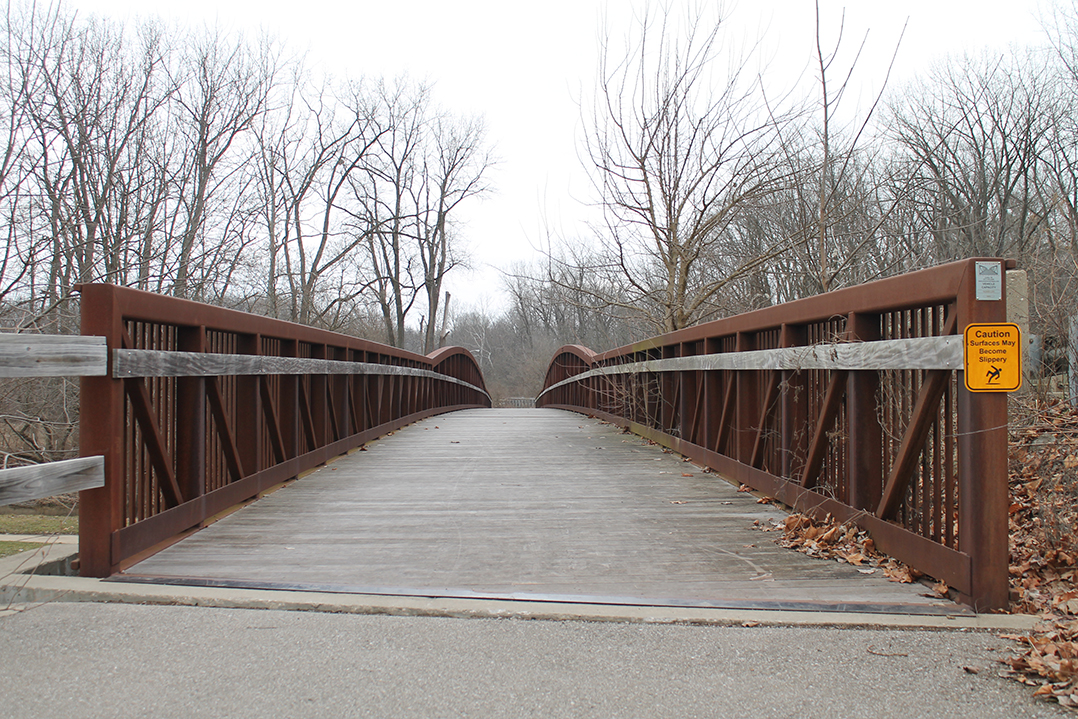 The pedestrian bridge and trail system along Sycamore Street are expected to remain open to the public with only periodic closures due to safety concerns.

What one business owner says

As the Sycamore Street bridge is closed for a construction project that is expected to last until Aug. 28, one Zionsville business owner said she sees the project as “something that has to be done.”

“It’s always a concern when you hear that a road, a major system in and out of town, is going to be shut down for an extended amount of time,” said Leighann Kogan, co-owner and manager of Zionsville Pizzaria.  “Yeah, that’s scary for any business owner directly affected.”

Kogan, however, said there are other entries into town, which she said should prevent drastic swings in business, especially during the summer months, which see said are the busiest months of the year for the pizzeria and surrounding businesses.