You are at:Home»Night & Day»Artist Profile»Smith takes on physical role in CCP’s ‘Lend Me a Tenor’

Some might consider this to be Tom Smith’s fourth act.

The Westfield resident was an English teacher at several central Indiana school districts, followed by a 23-year career as an FBI agent in the Minneapolis, New York and Indianapolis field offices. After retiring in in 2006, Smith served on the Westfield City Council. 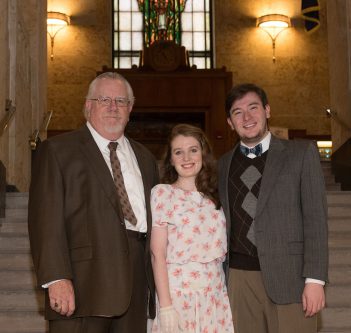 Smith, 70, then began acting four years ago and performs as much as possible.

“I’m trying to catch up for lost time,” he said.

Smith will be in his biggest role yet in Carmel Community Players’ production of “Lend Me a Tenor” Feb. 27 to March 8 at The Cat, 254 Veterans Way, Carmel.

“This is a challenge for me, not only because there is a lot of lines but there is a lot of running around, and I’m not a young man,” Smith said. “It’s a physical show. It’s a lot of work to get ready for, but it’s going to be hilarious.”

Smith plays Saunders, the manager of the Cleveland Grand Opera Co., in the farce by Ken Ludwig. Smith said he had no reservations about taking the part.

“(Director Susan Rardin) offered it to me and I jumped at it,” he said. “It’s the most energetic farce I’ve ever been in. I love the cast.”

Smith said he auditions for roles he believes he has a shot at getting.

“I’m a little old for the part but it fit me pretty well,” he said.

Smith said his daughter, Jessica, from Chicago, and son, Tom, an Indianapolis police officer, will attend the show because he has a large part.

“I’ve been in Ken Ludwig’s ‘Moon Over Buffalo’ at Civic Theatre,” Walls said. “I’ve always wanted to do this show, so when I saw they were doing it, I was first in line to audition.

“It’s a great part and lot of fun,” Walls said. “It’s a farce, so there is a lot of physical comedy and a lot of timing. It’s outrageousness and misdirection.”

Walls said he had never worked with Rardin or the cast before, but everyone has been fantastic.

“I think this will be a big crowd-pleaser as far as a show,” he said.

Caity Withers, who lives in Speedway, plays the female lead of Maggie.

“Every single character gets to do something fun and funny,” Withers said. “Maggie is fun because she is hopeful and earnest, but she is definitely someone used to getting her way. If she doesn’t get her way, she will go to great lengths to make sure she does get her way.”

Withers, from Anderson, did theater when she was younger and then picked it back up a few years ago.

“I saw this show a few years ago and thought it was hilarious, so when I saw the audition notice, I knew I wanted to try out,” she said.

Tyler Marx, Anderson, is performing in his second CCP production. He played in “The Failure to Zig-Zag,” which Rardin directed in the summer of 2019

“This is my first farce, but I like it so far,” said Marx, who plays Max. “It’s high energy and a lot of fun. The challenge is having all your actions synched up with the other actors.”