Throughout her life, Fishers resident Julie Sanders, 28, has spent lots of time outdoors. Growing up, she frequently hiked with her dad and now, as an adult, she is an in registration and guest services employee for a resort company. As a result, she has spent several months living in national parks.

Now, she’s going to try to hike the entire 2,200-mile  Appalachian Trail. She plans to begin next month in Georgia and finish in Maine by early September.

“I guess I got into backpacking originally as a kid,” Sanders said. “My dad (Jerry Sanders) is a big outdoorsman, so he took me on my first backpacking trip, a small one, when I was 12 or 13, so that instilled my love for nature.”

Sanders has always enjoyed nature, and her appreciation for it has grown in the past year as an employee in the National Park System. 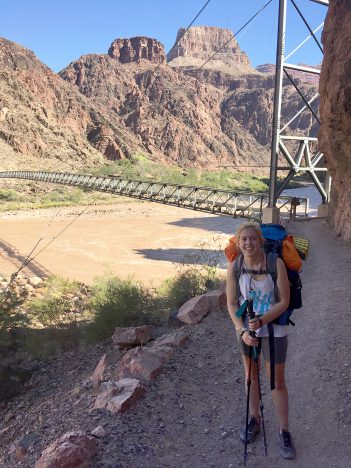 Julie Sanders has spent time living in national parks as an in registration and guest services employee for a resort company. (Submitted photo)

Sanders works for a resort company that provides lodging and concessions at national parks. She spends seasons living in parks where she works. She has lived in Big Ben National Park and in the north rim area of the Grand Canyon.

“There is employee housing inside the national parks that the general public doesn’t know about and doesn’t see,” Sanders said. “I just lived in this little community of employees, and I worked at registration and guest services for both Big Ben and the Grand Canyon. It’s really an awesome, tight-knit community. You live and work with the same people and you have an entire national park in your backyard to go explore in your free time.

“It allowed me to have an appreciation for nature, to let that be, let nature inspire you and let nature give you energy along the way.”

Sanders plans to return to work in the National Park System when she completes the Appalachain Trail hike.

“It’s been on the back of my mind since I was a little kid, and a couple years ago I decided to shoot for 2020, and it’s here,” she said.

When Sanders was a child, her family took a vacation to the Smoky Mountains, and she and her dad went on a day hike on a small piece of the Appalachian Trail.

“I have a distinct memory of Dad telling me some people take a couple months and walk all the way from Georgie to Maine, and I remember being a little kid and being so blown away someone actually does that,” Sanders said. “I remember thinking I want to do that when I get older.

“He’s very excited for me. He’s living vicariously through me and is going to come out two or three times this summer while I’m on the trail and do a couple days with me.”

Preparing for the hike

During Julie Sanders’ Appalachian Trail hike, she plans to average of 15 miles per day.
“I’m going to have some zero days and days where I hike way more than that,” she said.

The trail is roughly 2,200 miles long. To prepare, she plans to keep in shape and use correct gear.

“The last few days, I bought about three pairs of my shoes, and now I’m working on getting those shoes broken in so I don’t have to start with a fresh new pair of shoes,” she said. “I’m using this time right now to really prepare. For me, it’s more logistical preparation than a physical preparation right now.”

She expects weather will be her her biggest challenge.

“The first four or five weeks, I’m expecting snow, and being at such a high elevation, even though it’s down in Georgia, there’s a lot of snow,” she said.

Her longest hike will be a two-night, three-day, 40-mile hike.

“I have not done a lot of very distanced backpacking with extended days, but I’m ready to get out there and to learn what it’s like to have life on the trail,” she said.