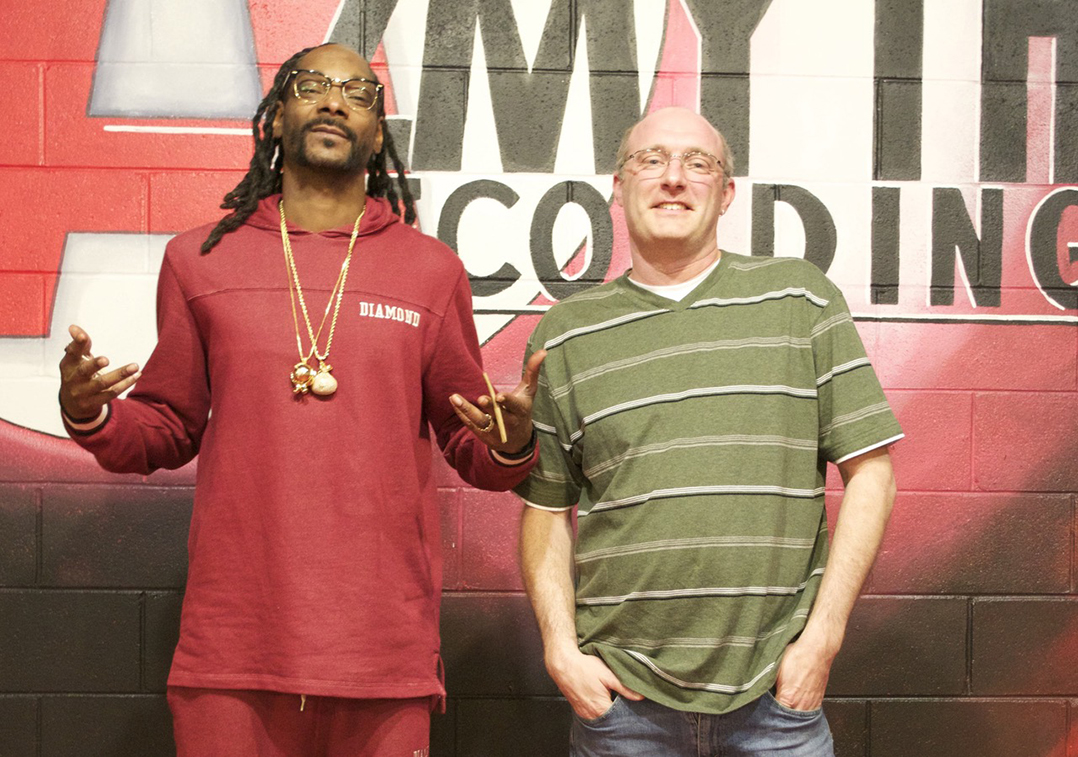 By Heather Collins
Carmel resident Ryan Adkins is the chief engineer and owner of Azmyth Recording Studio and The Azmyth School of Music Technology, an audio engineering and music production school. The studio will celebrate their 20th anniversary with an open house Feb. 26 from 5 to 9 p.m. and recently hosted “The Voice” auditions Feb. 12-13.
The studio has worked on award-winning projects that have gained national attention, and worked with heavy hitters in the industry including John Sebastian of The Lovin’ Spoonful, delta blues artist Yank Rachell, Cappadonna from Wu Tang Clan, Scott Russo from Unwritten Law and Migos, as well as local acts including Haste the Day and Emery. Eminem worked on producing D-12’s album “Purple Pills” at the studio, and Snoop Dogg came to the studio to do voice-over work for his TV show, “Coach Snoop.”
A 1993 Carmel High School graduate, Adkins said his first recording was for CHS Jazz Band. He built his first recording studio in his parents’ three-car garage near Civic Square in Carmel. After earning his degree in the recording arts from Full Sail University, he moved back to Indiana and began an internship at The Lodge, a recording studio in Indianapolis. He became head engineer at The Lodge before relocating to Bloomington to work as studio manager and engineer at Echo Park Studios, owned by John Mellencamp’s guitarist, Mike Wanchic.
In 1999, Adkins launched his own studio, Azmyth Recording Studios, in Carmel at 136th and Range Line Road. The studio relocated to its current location in Indianapolis in 2007 due to the buildout of the 136th and Range Line Road roundabout.
The studio is equipped with top-of-the-line gear and rare vintage finds including a 1960s Telefunken 251 microphone, as well as Adkins original recording device, an Otari MX-80 2 24 analog tape machine. The studio recently added a completely reconditioned 24-channel Neve VR console to their recording equipment roster.

From church to Carlos Santana

A Noblesville native, Harrison Ruhl met Adkins while working sound at White River Christian Church in Noblesville. Adkins noticed Ruhl’s talent and took him under his wing. Ruhl attended the Azmyth School of Music Technology and became studio assistant in 2008. In less than a year, he was running his own sessions.
“The healthy habits that I learned at Azmyth School, I still use on a daily basis, all the time,” he said. “(Adkins) gave me a great manual and essentially gave me the keys to the kingdom.”
Ruhl has worked as the audio system engineer for Carlos Santana and Morrisey as well as fly technician for Stone Temple Pilots and monitor engineer for The Cult. He is currently on tour as the audio system engineer for Gabriel Iglesias a.k.a. Fluffy.
“Azmyth is a hidden gem of recording studios in Indiana,” he said.

The Azmyth School of Music Technology

Carmel resident Luke Amaral, a 21-year-old, said he enrolled in The Azmyth School of Music Technology to learn how to record his own music. The 20-week course offered Amaral a chance to have one-on-one lessons and shadow recording sessions with the head engineers and gain access to the student studio.
“There’s something about a professional studio, and that vibe that it brings, that in my opinion is unmatched,” he said.
He released his album “The Feeling’s Mutual” under his artist name, Lukey (Instagram: @LukeAmaral_) in the summer of last year and released his latest single, “Better Off Alone,” Feb 15. He is now a freelance engineer at the studio and continues to work on his own projects.
For more information, visit azmythrecording.com.