You are at:Home»Current in Zionsville»Zionsville Cover Stories»Tinkering: Makerspace opens in Boone County

Brian Hull said he knows he can’t make all the things he imagines in his mind, but he said it doesn’t deter him, and he hopes it won’t deter others, either.  That’s why he opened his “Willy Wonka’s Chocolate Factory” for tinkering.

Nestled in the outskirts of Lebanon, Hull opened Maker Factory, at 437 W. 150 S., in January, in a building filled with tools and machinery used for 3-D printing, welding, woodworking, robotics, coding and electronics – essentially, everything needed to make something. 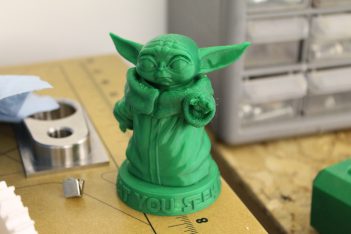 Members create a variety of items at Maker Factory, including a 3-D-printed Baby Yoda figure.

At Maker Factory, Hull works as a contractor, producing all manner of objects and items for Boone County residents, large and small, from furniture to the occasional 3-D-printed Baby Yoda figure. He also offers memberships to customers who want to use the space to make items of their own. And if a customer doesn’t know how to use specific equipment, such as a 3-D printer, he offers instructional classes.

Hull created the business because of his personal love for tinkering. From an early age, he tore apart trucks with his father. He didn’t enjoy it at first, but he eventually learned to love the art of building as a form of creative expression.

The same passion for science manifested itself in the form of artistry at a young age. As a child, Hull won awards for drawings and created sculptures. He said he never viewed science and art as separate entities. He said liberal arts are were the birthplaces of science, citing philosophy, art and primitive sciences in Ancient Greece as examples.

“It’s the Holy Grail. It has a community,” Hull said. “That’s one of the main things for maker spaces, is to build a community of people who are interested in different things – sewing, electronics, metal, wood. And you see a lot of innovations coming from that.”

Hull did a nationwide search last summer for a location to house his business idea. A former engineer, he wanted a site with office space and a workshop. With that in mind, Hull met Stephen O’Hara late in 2019. The building Maker Factory operates in is owned by O’Hara, who runs his business, TABS Technologies LLC, out of the same space.

When starting a previous business, O’Hara renovated the Lebanon location – what was previously a derelict 84 Lumber building – adding office space, laboratories, and rebuilding the exterior. O’Hara said he started his entrepreneurial journey in a  way similar to Hull, searching for a space large enough to meet his requirements.

“He does spend a good deal of time in the shop,” O’Hara said of Hull. “It’s exactly the type of thing that I would have loved when I was starting out.”

Hull settled on the Boone County space after spending several months talking to other entrepreneurs who have opened maker factories across the United States. He even visited San Francisco, the birthplace of the maker movement, to seek advice and scout possible locations.

The maker movement has gained momentum since originating and spreading out of Silicon Valley, but Hull hopes his maker factory, in particular, can serve as a place for people to consider new possibilities. He wants to find ways for young children to learn from older experts, and for young people on the forefront of new industries to be able to teach veterans in their field.

“You hear things about how there aren’t enough electricians, welders, construction workers, trade jobs because everyone is going into the four-year degrees or a technology field,” Hull said. “But we still need people who can fix and build things.”

For more information and a calendar of classes, visit makerfactoryindy.com. 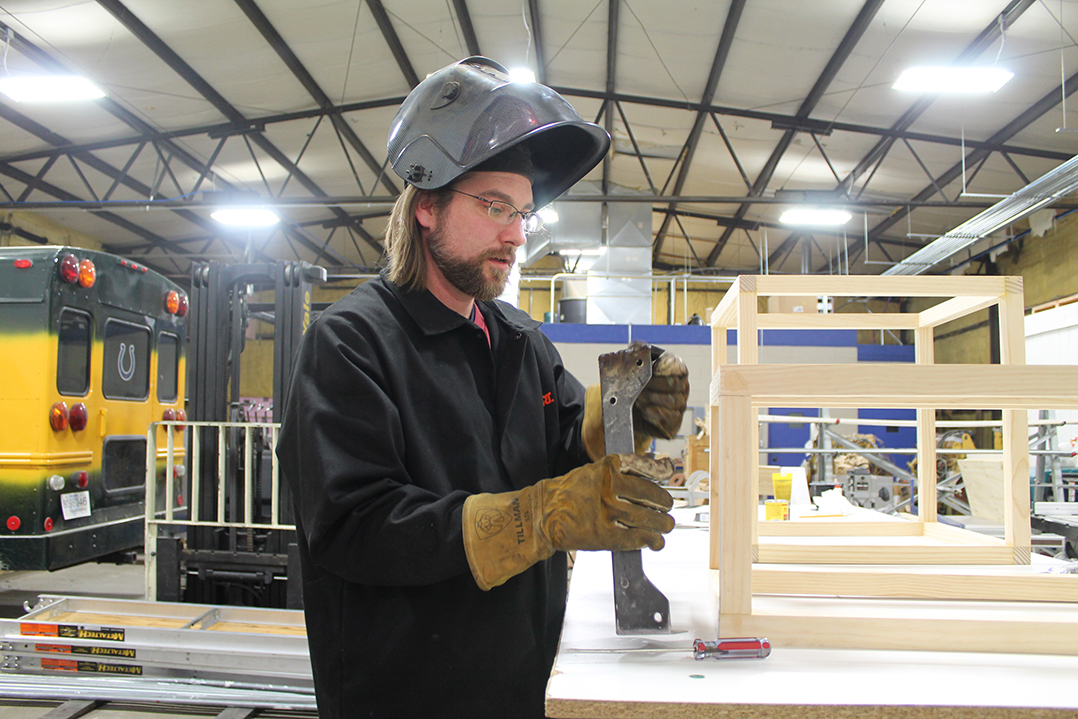 Brian Hull assembles furniture on one of his most recent contracting jobs. (Photos by Jarred Meeks)

In addition to his maker business, Brian Hull volunteers at the Zionsville CoderDojo, where students age 7 to 17 learn how to code, run programs and build robots.

Hull said it is hard to get his own two children interested in anything other than video games, but he believes the classes he offers can pique the curiosity of children.

“What I’ve noticed is kids are very into electronics and playing games, and I think more so, they are getting into coding,” Hull said. “I think that’s our message here. ‘Hey, you want to build a robot? You want to build an electric car or a skateboard or whatever you can imagine?’ That’s what we’re trying to build, an environment where everyone can safely do that.”