You are at:Home»Current in Carmel»Carmel Community»Carmel man assists in aiding Rohingya refugees in Bangladesh

Since 2017, Masum Mahbub has taken seven trips to Bangladesh, where he’s seen firsthand the struggles of Rohingya refugees who were forcibly displaced from Myanmar.

Mahbub, a Carmel resident, works for OBAT Helpers, the only Indiana-based organization providing education, health care and other services to people in need in Bangladesh. He was introduced to the nonprofit while working on a master’s degree in nonprofit management at Indiana University. 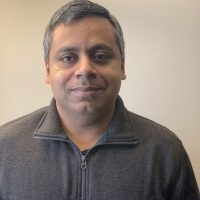 Bangladesh is one of the poorest and most densely populated nations in the world, with approximately 3,000 people per square mile. Mahbub works in one of 30 camps in the southeastern part of the nation housing 1.2 million Rohingya refugees, a group comprised mostly of Muslims who left Myanmar after the army forced them out in what a United Nations official described as ethnic cleansing after visiting refugees in Bangladesh.

Educational services for children in the camps consist of temporary learning centers in bamboo structures, and medical clinics on-site see an average of 250 to 300 patients each day. In 2018, OBAT Helpers added a clean water project and a women’s empowerment program with skills training.

Although his role is to oversee programming and budget coordination, Mahbub has worked directly with vulnerable adults and children in the camp. Recently, his 14-year-old daughter, Maleeha, a freshman at Carmel High School, also volunteered in the clinic and school.

“Until you see and go there, you cannot actually even understand the level of suffering and the trauma these people have in the situation they’re going through,” Mahbub said. “If we want to solve this type of crisis, we should do our part.”

On one of his trips, Mahbub met 9- and 7-year-old brothers who witnessed their entire family being killed. They escaped from the back of the house and survived by running with hundreds of other people fleeing the village.

Although many people are unaware of the severity of the Rohingya refugees’ circumstances and living conditions, Masum urges others to “come forward to support so that we can continue doing the work that we’re doing.” Average costs are $4 per clinic patient and $5 to $6 per month for each student. Approximately 90 percent of the organization’s funding comes from individual donors.