You are at:Home»Current in Fishers»Fishers Community»Longtime Fishers resident turning 100

Helen Flowers said turning 100 doesn’t feel any different than when she turned 80 or 90.

A longtime lifetime Fishers resident who will celebrate her 100th birthday March 9, Flowers is a first-generation American. Both of her parents’ families emigrated from Denmark. Her father, John Jergen, a carpenter, moved to the U.S. at age 19. He men Flowers’ mother, Alma, a seamstress, in a Danish-settled neighborhood on the south side of Indianapolis, where Flowers grew up before moving to West 36th Street near Crown Hill Cemetery. She later moved to the Hamilton Hills neighborhood at 96th Street and Allisonville Road in Fishers in 1959. 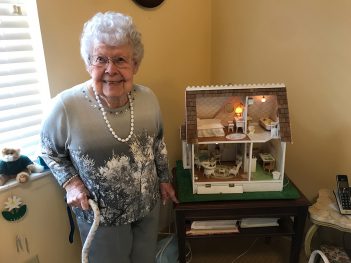 Helen Flowers pauses next to a dollhouse she built in her room at Prairie Lakes Health Campus. (Photo by Sadie Hunter)

She lived there with her husband, Jack, who died 12 years ago.

“He took me to a party and didn’t pay any attention to me the whole time, so I thought to heck with him. I mean, I didn’t like him at all at first,” Flowers said. “About a year later, he asked me to another party and things started. I remember the date we got engaged, Dec. 23, 1939, and he asked me right in the barber shop where I worked. Then, we went out and got drunk.”

“My husband was in the service during World War II. He was a tail gunner on a B-17 (bomber) and did 30-some missions across Europe,” she said. “We were lucky he came home, but when he did, we picked up our life just were it was, and we had four kids.”

For several years, Flowers was a manicurist inside a barbershop at The Hotel Antlers at the corner of Ninth and Meridian streets in Indianapolis, which closed in 1969. Flowers said after she had kids, she left the job but continued doing hair and nails off and on.

Three years ago, Flowers moved to Prairie Lakes Health Campus. Her room is filled with her own  works of art, from dollhouses to knitting and needlepoint projects to paintings on the walls. Each week, she and her Prairie Lakes friends go on outings. They’ve gone sledding and recently toured a chocolate factory in Zionsville.

On March 7, Flowers will celebrate her birthday with a party with family and friends.