You are at:Home»Current in Noblesville»Noblesville Community»Noblesville resident in need of kidney transplant

“He’s the man I love and the father of my children. I would jump and give him a kidney in two seconds if I was able and, unfortunately, I’m not,” Jenny said. “I just want people to stop to think if it was your husband, your son, your family member, would you want someone to do that for them?” 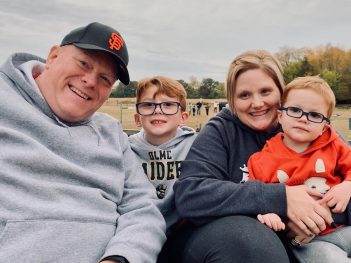 In late 2018, Doug, a 51-year-old Noblesville resident, started the kidney transplant process and was placed on the national kidney wait list in August 2019.

“We are hoping for a living donor that is a match,” Jenny said. “That national wait for a deceased person’s kidney for his age group is close to seven years. A living kidney transplant, that often has more success, could take place at any time. That’s our best hope.”

The donor could be a direct match for Doug, or the scenario could be a paired match where someone who is willing to give a kidney for Doug is a match for someone else, in what would be a kidney swap.

Jenny has created a Facebook page Donate to Doug.

“My wife has been a wonderful advocate for me,” Doug said. “I can’t imagine doing it without her, trying to get the word out. We have bumper stickers, not just to raise awareness for me, but for all the people that are need of a kidney transplant.”

Nationally, there are 100,000 people in need of a kidney transplant.

The couple and their two sons, George, 7, and Fred, 2, are members of Our Lady of Mount Carmel Church in Carmel.

Doug, a middle school teacher in Warren Township in Indianapolis, missed the last part of tje 2018-19 school year. He chose to do dialysis each night at home so he could return to teaching for the 2019-20 school year. But he suffered a fall and got a concussion, followed by bronchitis. Eventually, his health issues forced him to go on unpaid medical leave from his teaching job at in mid-November 2019.

“As much as I feel I have a lot to give, I don’t think they were receiving the benefit of that because I wasn’t there,” Doug said. “If I’m not able to get a kidney this year, I will probably have to leave teaching.”

Doug was diagnosed with diabetes in 2010. He had to be hospitalized twice because of excessive fluid build-up.

In March 2019, he went on dialysis. He went through months of training to do the dialysis at home.

“He hooks up every night when he’s sleeping,” Jennifer said. “It takes about an hour to get ready for it and 30 to 40 minutes to do all the post-dialysis stuff.”

The dialysis machine creates a lot of noise and beeping though the night. The couple has a sound machine to drown out some of the noise.

“It’s a blessing to do at home so he doesn’t have to go to a center, but there is tubes, machines and boxes all over the place,” she said. “It’s supposed to be easier on the body because it is longer treatments, so you are able to take more water off.”

If you are interested in learning more about being a living kidney donor for Doug Hauser, please call 1-800-382-4602 or visit iuhealth.org/transplant.