You are at:Home»Current in Carmel»Carmel Cover Stories»Anchored faith: Brother’s death leads to atheism, then ministry for Hall of Fame golfer

As a 5-year-old, Nancy Fitzgerald’s faith in God was not just shaken but destroyed.

While at the family’s Michigan lake house, she found her 2-year-old brother Stephen in the lake and tried to save him.

“The babysitter said it was my fault he died and I killed him,” Fitzgerald said. “As an adult, I understand that now it was a reaction of horror. But as a 5-year-old recipient, I just felt guilt and shame. At that time, I asked God to fix him. But my dad finally told me (the paramedics) weren’t able to save him and Stephen died and was in heaven. I said, ‘Who would want to be with a God who killed him?’ That was with me for 27 years. I became a cynic. 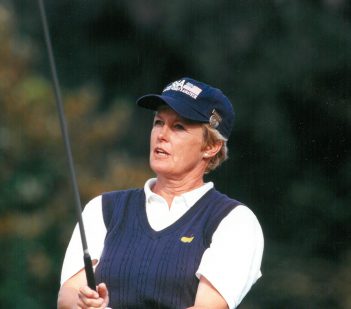 “My reaction to a God that would allow this to happen was an extreme unhealthy fear. I was terrified he was going to kill me.”

Fast-forward to age 32 and Fitzgerald, who considered herself an atheist, said she felt something missing in life — despite a successful college golfing career at Indiana University, earning two master’s degrees from IU and a successful amateur golfing career.

“I was winning golf tournaments all over the world, but there was a missing link,” she said. “I figured it had something to do with God. I was staying with Christians during a golf tournament and began reading Scriptures.”

That led to extensive research. She peppered Christians with questions like, ‘How do you know the Bible is true?’

“I researched it to the point that I could no longer disbelieve,” Fitzgerald said. “The evidence is overwhelming.”

As a result, she wanted to share that faith, eventually leading the longtime Carmel resident to found the Carmel-based ministry Anchorsaway. Sessions are held on Tuesday evenings from mid-January through April. The sessions, which are open, is primarily designed high school juniors and seniors.

Fitzgerald started on that path when her oldest son was a senior in high school in 1989. She asked him what he was going to do when he encountered skeptics or atheists in college.

“I think Christians need to be slow to speak and quick to ask people’s stories as to why they didn’t believe,” she said. “Instead of preaching, sometimes we need to be good listeners.”

Fitzgerald led Bible study sessions in her home, where she began to answer questions about Christianity. 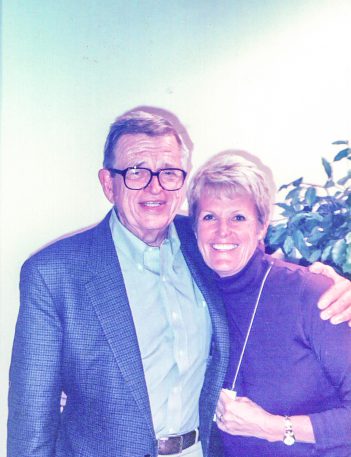 “They were fascinated with it,” she said of the students. “They called themselves Christians because they went to church, but it wasn’t until we really got into it that they got excited about their faith and how to love others that think differently. We started with a group of six kids, and in a few years we had 150 kids in our great room at home.”

Fitzgerald studied for a year with the Colson Fellows Program, founded by the late-Chuck Colson. A former special counsel to President Richard Nixon who went to prison for several months for obstruction of justice during the Watergate scandal, Colson became an evangelical Christian and founded a prison ministry.

“Chuck Colson said, ‘You are going to have to give up your golf to do this,’” Fitzgerald said. “I willingly backed off of golf and jumped full time into ministry because of the importance of what we teach of a life with Christ versus a life of golf.”

Fitzgerald, the 1997 U.S. Senior Women’s Amateur Champion and a 1990 Indiana Golf Hall of Famer, decided she could play fewer tournaments.

“I want to be remembered for making a little difference in a life rather than winning golf tournaments,” she said.

Fitzgerald said that is not to diminish what she describes as the greatest game ever and one that has provided a wealth of friends and experiences.

“But my heart is with kids,” she said.

Fitzgerald has made it her mission to teach students how to use the ministry.

“It’s how to develop a real faith in Christ that not only allows us to answer our questions, (but) to give us purpose and hope in a mixed-up world, and to realize we’ve all messed up but God loves us anyway,” she said. “If you believe in Christ and he died and rose again, we’re forgiven and he gives us new chances. We need to take advantage of it. Rather than looking in the past with regret, we’re looking in the future with hope.”

Fitzgerald and her husband, Ed, a retired heart surgeon, have four children and 10 grandchildren, who all live in Denver.

While at Greenfield-Central High School, Katie Peters had been taught Nancy Fitzgerald’s curriculum on understanding the Christian faith.

Now, she has returned for a refresher course on the Anchorsaway Worldwide Curriculum to share with others.

“Several parents hosted it in their homes and opened it to high school juniors and seniors in the area,” Peters said. “The people who did it were trained by Nancy.”

Peters, 25, is now a Greenfield-Central dietician.

“I want to do what folks did for me and bring it to this area,” Peters said. “Even though I went to a private Christian university (Samford University), the material I learned (from Anchorsaway) made me confident in what I believed. It gave me a solid foundation.”