You are at:Home»Current in Carmel»Carmel Community»Drudge receives Silver Anniversary honor

Jennifer Drudge is set for an enjoyable trip down memory lane.

The former Carmel High School girls basketball coach is being honored on the Silver Anniversary at the Indiana Basketball Hall of Fame’s Annual Women’s Awards Banquet April 25 in Indianapolis. Drudge, whose maiden name is Marlow, was a 1995 Indiana All-Star at Rushville High School. 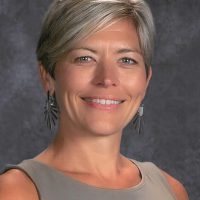 “My time at Rushville was so enjoyable. We had great coaches, great teammates,” said Drudge, a Westfield resident who has worked at Carmel High School for 20 years. “We didn’t have drama on the team. People loved coming to practice and competing. I got to play with some great teammates that continue to be friends.”

Drudge said Rushville has a strong girls basketball tradition even though it hasn’t won a state title.

Drudge scored more than 1,300 points at Rushville and nearly 1,500 points at Butler. She led Butler in scoring with a 13.7 average in 1998-99. She started out as assistant girls basketball coach at Carmel High School in 2000-01, then spent the next three seasons as head coach.

Drudge began helping with the girls tennis team in 2019. She reached the state doubles final as a junior at Rushville. She also coaches her niece Annika Marlow’s travel basketball team in the spring. Annika is a sophomore on the Rushville team coached by Marlow’s sister-in-law, Melissa Marlow.

Drudge said it is an honor to be included on the Silver Anniversary Team.

“The Indiana Basketball Hall of Fame does such a nice job of trying to promote girls and boys basketball currently and recognizing players from the past,” she said. “It’s a nice recognition. It means a lot to me and my family and my teammates. Back in Rushville, it means a lot to the community.”