You are at:Home»Current in Noblesville»Noblesville Cover Stories»Reading about women: Gal’s Guide to the Galaxy opens women’s history library

What began as a women’s group in 2013 has grown into Gal’s Guide to the Galaxy, a library comprised of books written exclusively by women or for women. It was founded by Noblesville resident Leah Leach.

The group started as a way for local women to find balance in their everyday lives.

“We started with that, and it turned into, ‘Let’s do more,’ so we started doing podcasts,” Leach said. “Those came about because the main role model in a woman’s life is her mom, and if they don’t want to be a mom or they don’t know their mom, we said, ‘Let’s do a podcast about women role models in history.’”

The idea came about because Leach was concerned that much of the history about women wasn’t being saved.

“That’s when we realized there really isn’t (a women’s library). The closest one is the Schlesinger library. It’s attached to Harvard University,” Leach said. “However, you cannot browse the stacks. We wanted to be a library like you’re used to — you go, check it out, take it home and research. That’s why we call ourselves the first women’s history library where you can browse the stacks and check out a book.”

Gal’s Guide to the Galaxy contains works of fiction and nonfiction, but the collection of 1,600-plus volumes largely consists of biographies.Since seeking donations in January 2019, Gal’s Guide to the Galaxy has operated in Leach’s downtown Noblesville home. However, a grant has allowed the library to rent space at Nickel Plate Arts, 107 S. Eighth St., in the Stephenson House.

The library will conduct its grand opening from 6 to 9 p.m. March 6.

“March is Women’s History Month, so that works out nicely,” Leach said.

The space is 132 square feet. Gal’s Guide to the Galaxy will operate the same hours as Nickel Plate Arts – noon to 5 p.m. Wednesday through Friday and 10 a.m. to 5 p.m. Saturday.

“It’s basically a bedroom,” Leach said of the space. “It will be cozy, adorable and everything is going to have as many multi uses as possible to fit in there. It’s going to be like coming in to someone’s private library nook where you can check out books.”

Attendees can sign up for a library account at the grand opening. The event will feature a women’s history activity.

In the meantime, library manager Bonnie Fillenwarth will continue searching for more grants.
“We are moving into this space, but we would like a bigger space,” Fillenwarth said. “We would ideally like a space big enough to hold the books and to hold events and have a podcast recording room.”

“We will take anything, especially if it’s written by a woman or about a woman,” Fillenwarth said. “If it’s not, we can sell it to raise funds for the library.” 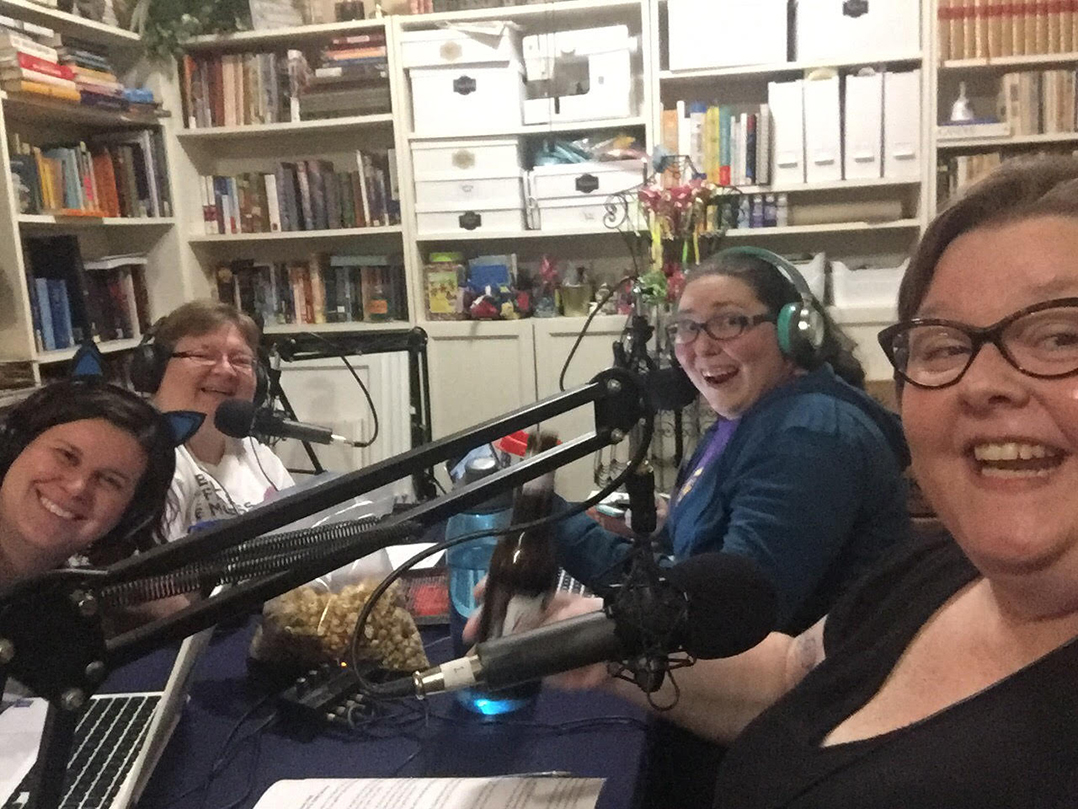 From left, Katie Harris, Debbi Sponsler, Bonnie Fillenwarth and Leah Leach had a podcast about women role models, which eventually led to the creation of the Gal’s Guide to the Galaxy library in downtown Noblesville. (Submitted photo)

Favorite book: “Eliza Greene Chace.” “There (were) only 100 copies made after she died,” said Leah Leach, founder of Gal’s Guide to the Galaxy, a women’s history library. “It was written by her daughter and husband about her life because they didn’t want her to be forgotten. She was a teacher.”

Favorite place to read: Front room in her house

Favorite place to browse books: The mega sale at the 4-H Fairgrounds.