Westfield Washington Historical Society President Diana Peyton stresses the group isn’t a preservation society, but that didn’t prevent it form taking the initiative to preserve a log cabin built in the 1830s.

The historic structure was earmarked for demolition to pave the way for a housing development. 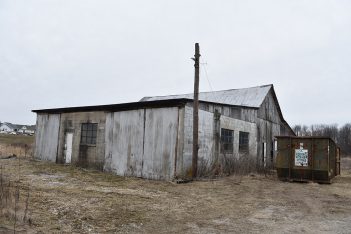 A barn was built around the cabin. (Submitted photo)

A barn was built around the cabin roughly 100 years ago, near what is now Shady Nook Road, a mile north of Ind. 32.

Langston Development is constructing a housing development on the cabin site and planned to tear it down. The developers didn’t know about the cabin, but when they learned of the history, they told Peyton the WWHS had two weeks to remove it from the property.

“So, I tried to get ahold of Conner Prairie, but they couldn’t do anything that quickly,” Peyton said. “I tried everything, and I said, ‘You know what? We are just going to have to do it,’” Peyton said.

WWHS hired a contractor to deconstruct the cabin. A historian assisted in the process.

The WWHS and City of Westfield officials, including Mayor Andy Cook, agreed to relocate the cabin on city property. 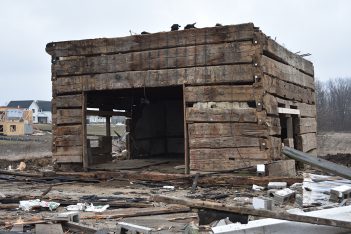 The cabin was built in the 1830s using native lumber. (Submitted photo)

“It will be an amenity for the community,” Peyton said. “It’s going to be reconstructed, and you’ll be able to have birthday parties or weddings or meetings in there.”

Two unnamed sites are being evaluated. The cabin has been fully deconstructed and is stored in the barn behind City Hall.

“This happened so quickly, and we had two weeks to get it down, so our focus was to get it saved and put to bed, get it preserved,” Peyton said.

Now, the society will begin fundraising to restore the cabin. The estimated cost is $110,000.

“Hopefully, we will have it rebuilt this year or the first of next year, but its final resting place has not been decided,” Peyton said.

When it is rebuilt, Peyton expects the cabin will have a fire place and new wood, among other improvements. Bids will be taken in the next few weeks.

“This is the biggest project we have ever in our history taken on,” Peyton said. “We are the historical society and not the preservationist group, but this is something. I have shed more tears over this cabin. I wanted this cabin so bad for the city and so bad for our community, and our township, too. This is so significant to the beginnings of Westfield, we just have to preserve it and put it back up.

“It’s going to be a teaching tool. We have schools come into the museum, and this will be an amenity and kids can see this is a log cabin and this is how people lived.”

The Westfield Washington Historical Society estimates the cabin was built between 1832 and 1835 by Nicholas Barker. Barker was from North Carolina.

“The reason he moved (to Westfield) was because he was against slavery,” Peyton said. “We have more research to do, but we think he was a conductor of the Underground Railroad,” WWHS President Diana Peyton said.

The cabin is 22 feet by 20 feet with a partial second floor. Some of the logs are 26 inches tall.

“Our historian said this is all native lumber, taken right there from the land,” WWHS President Diana Peyton said. “This cabin is so, so important to us.”