Westfield resident Derek Jones, 40, is in a chronic battle with cancer and is asking for community support to help the Leukemia and Lymphoma Society find a cure for some of the most prevalent types of cancer. 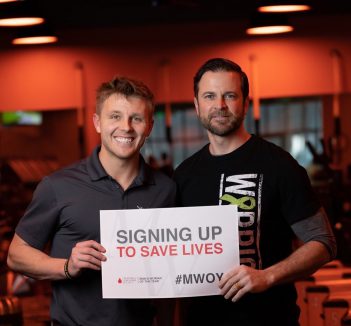 In March 2019, Jones was diagnosed with non-Hodgkin follicular lymphoma – cancer of the lymphatic system – at age 39. Jones had minimal presenting symptoms at the time of the diagnoses. He received four months of chemotherapy and immunotherapy. He’s been in remission since October 2019.

In the wake of his treatment, Jones has been raising funds to benefit the LLS, whose mission is to cure leukemia, lymphoma, Hodgkin’s disease and myeloma and improve the quality of life for patients.

“The kind that I have, it’s chronic,” Jones said. “Doctors say it will come back, so that is a motivating factor. I reached out to LLS to say, ‘Hey, is there a way I can get involved?’ I found out a friend of ours, Scotty Banks, was going to run for Man of the Year.”

Through  May 9, Jones and his family will campaign for Banks for the Man of the Year award presented by the LLS. Each participant and their team will raise money to benefit LLS. After the 10-week period, the candidate who raises the most money will be named Man of the Year. The initiative began Feb. 27.

“There are so many different potential cures out there that, in my honest to goodness belief, it’s a matter of how quickly can you fund the research to find the treatments that are going to be effective,” Jones said.

Donations to Brooks’ campaign can be made at pages.lls.org/mwoy/in/indy20/djones.